On the way to our little trip to Switzerland, we wanted to make a small detour to a very special place. At this point a small interlude to:

As perhaps some already know, my girlfriend is a very talented portrait photographer, with lots of great ideas and creativity, especially in the area of ​​Fantasy Shooting in combination with composing in Photoshop. Visited they necessarily talk on Facebook Elena Frizler

In your back matured a great project, but that a few weeks detective work required ... 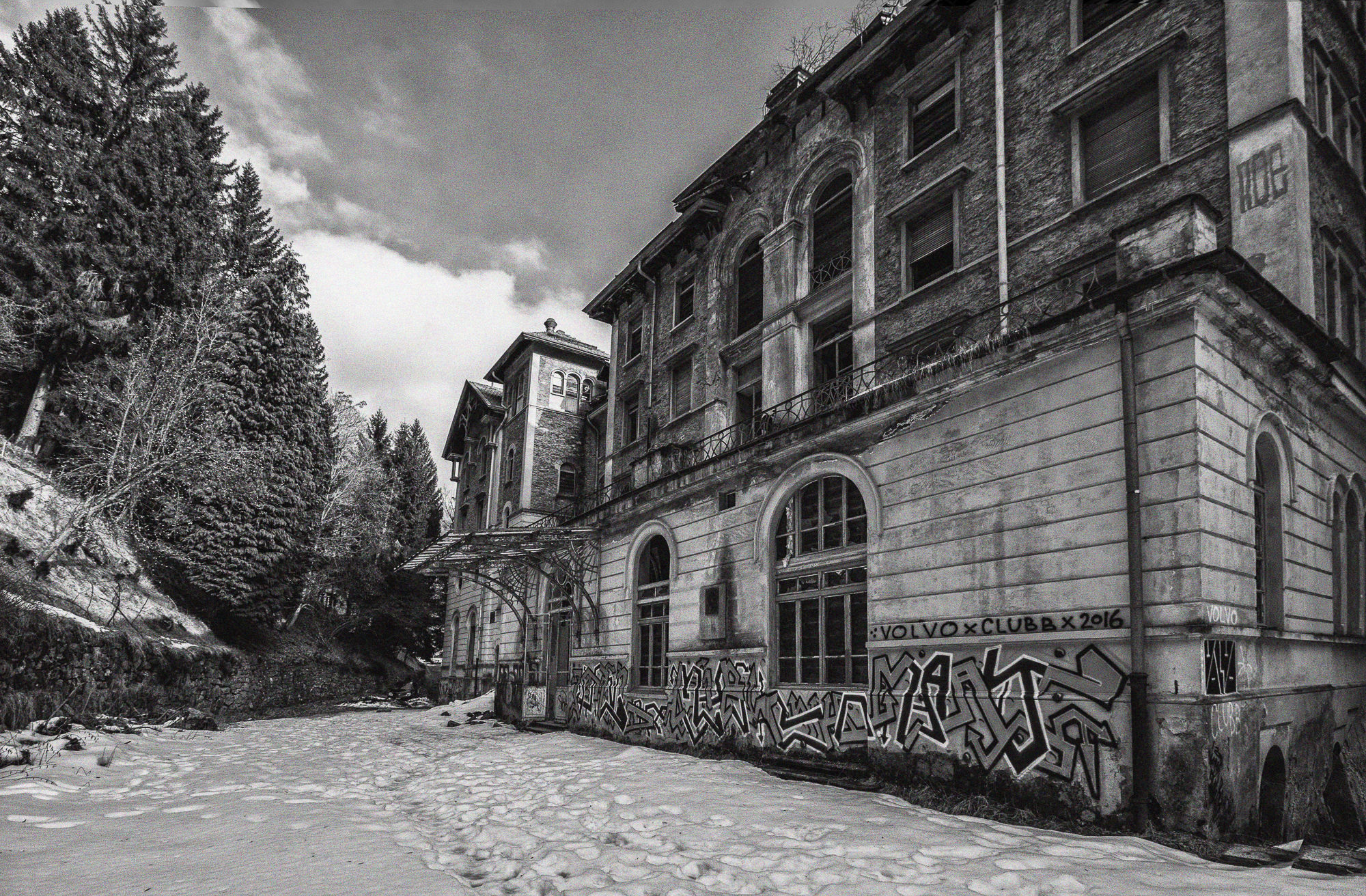 We were looking for a ruined old ruin, or have been told a house or villa that leave different decades your destiny. Something grusliges it had to be and optimally accessible. We had written out systematically us even a few places, but they were either too far, partly abroad, have been completely barricaded or even now demolished. There was a small alternative in Lucerne itself, we also have a short visit abstatteten ... The old brewery Eichhof. But even then we were surprised with a rather disappointing sight. Some of the old premises are now as deposits for any company "abused" and where it had at least the appearance, to be found but a few promising walls, the doors and gates were locked firmly. There was no chance get into it. We also did not stay too long there and made our way to the actual destination. One and a half hours drive and always thinking about it and pondering what we probably find there. To be honest, we had heard some very scary stories from insiders.

But more on that. 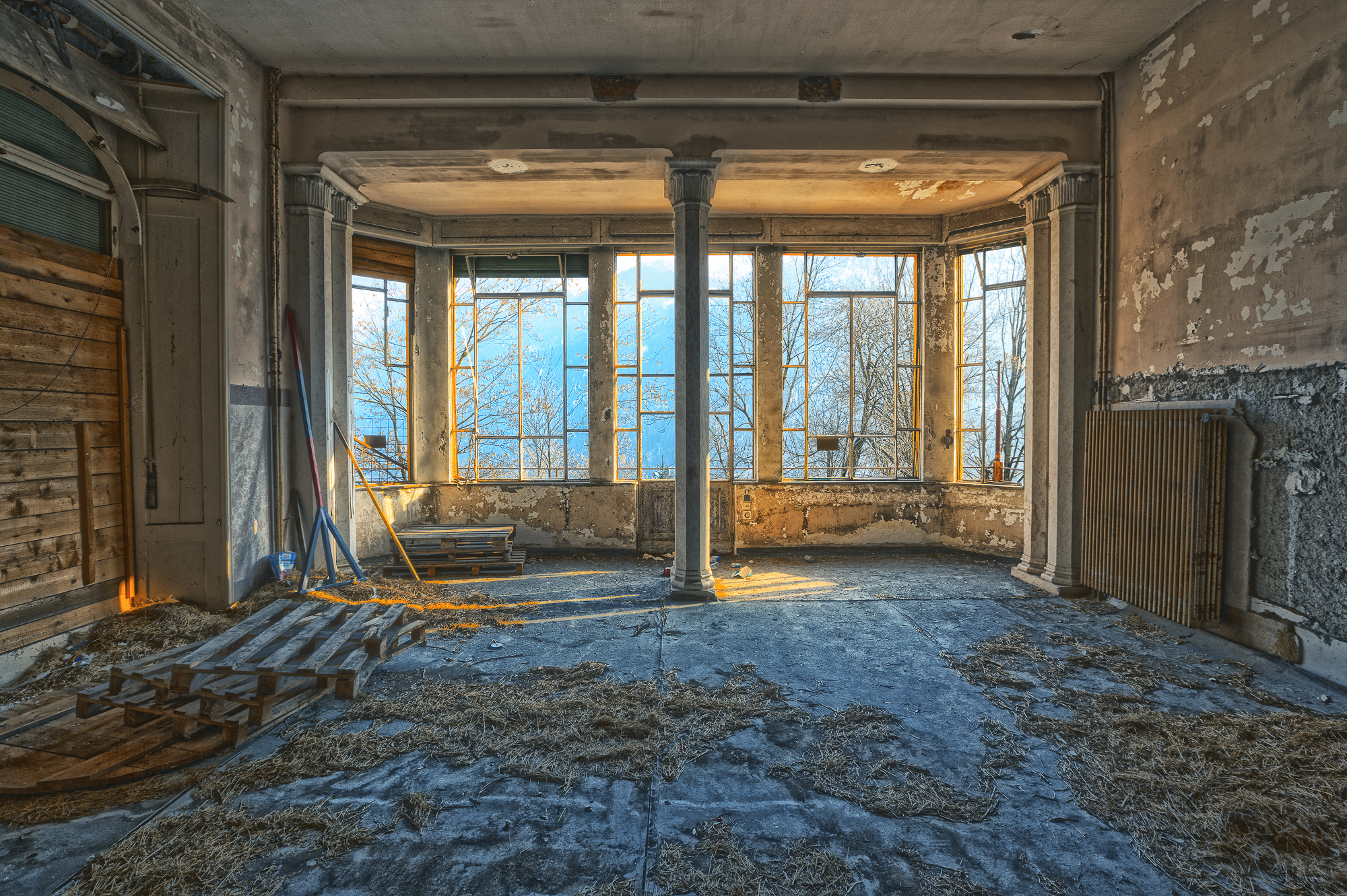 When we took the appropriate exit, we looked first in this small village around and studied the distance on the Navigerät through again. Honestly, the village itself was a bit spooky 😛 Old stone wall houses, the shutters, an old man who was watching us and otherwise not a soul.

The road led us outside the village, to our right a swampy landscape and a high mountainside, we were already pretty close. And without being properly prepared, it appeared on the steep mountainside. An imposing building that before 50 Years was shut down. There was once a tuberculosis hospital and military hospital and plummets toward the right. We drove the narrow road up snaking and then turned left into the access road in front of the house. A disturbing silence lay over the place and was only by a gentle rustling trees, caused by a light breeze, interrupted.

Without big words we packed our photo gear together and got ready for inspection. We wandered first to the front of the building and discovered some disk-less window through which we could climb in, but put our gear on the large terrace continued and were deeply impressed. Down in the garden we saw an old dilapidated playground and I imagined, that the swing moved, probably the wind. 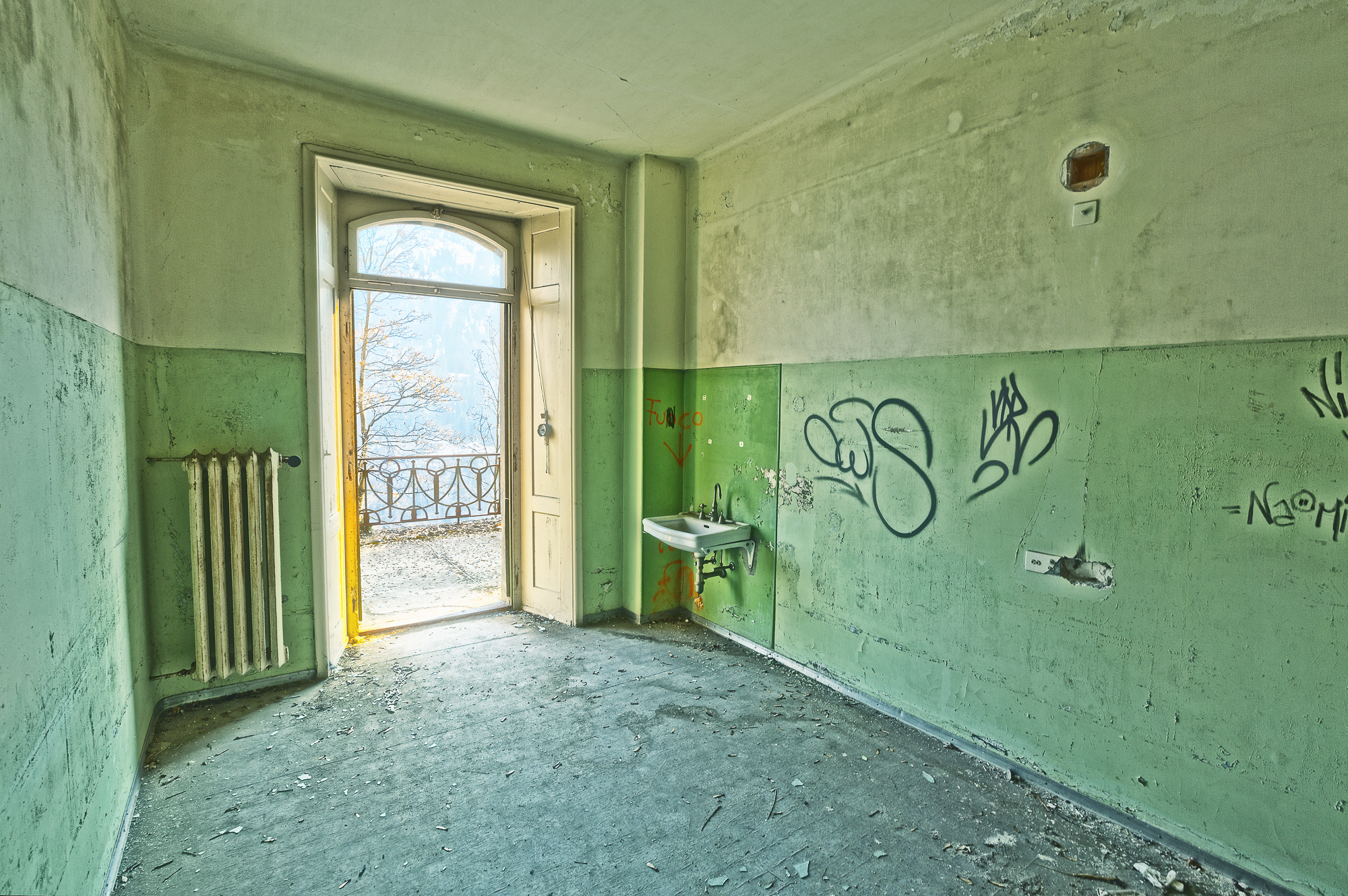 We walked around the building and then came to a covered entrance with bushes that down to the basement led. It was pitch dark and without a flashlight to get as close. The first section was cluttered with rubble but we penetrated deeper into the bowels and before us lay a long dark corridor, left and right rooms to rooms lined up, dark as night, and always will be observed with a queasy feeling. The fact was that before us the dead Keller, meant definitely:

No admittance for the faint hearted!

I spontaneously remembered the horror shocker "Silent Hill", a video game was the successfully filmed. Those who know it, know what I'm talking and would if suddenly somewhere tackle at once the sirens ...

The exploration of the basement was for these reasons very superficially 😀 and we got the escape route stairs to the ground floor. Here it was by the incident light from outside, a little more pleasant. We took some pictures and documented the interesting areas that came to Elena's photo shoot in the narrow selection. The old clinic had 5 Floors and step by step and always alert we checked everything from. Especially watchful, because of the many pieces of broken glass on the floor, the rotten plates occasionally covering a hole at the bottom and the stairs leading up, littered with cracks and to anticipate possible how much weight they withstood. 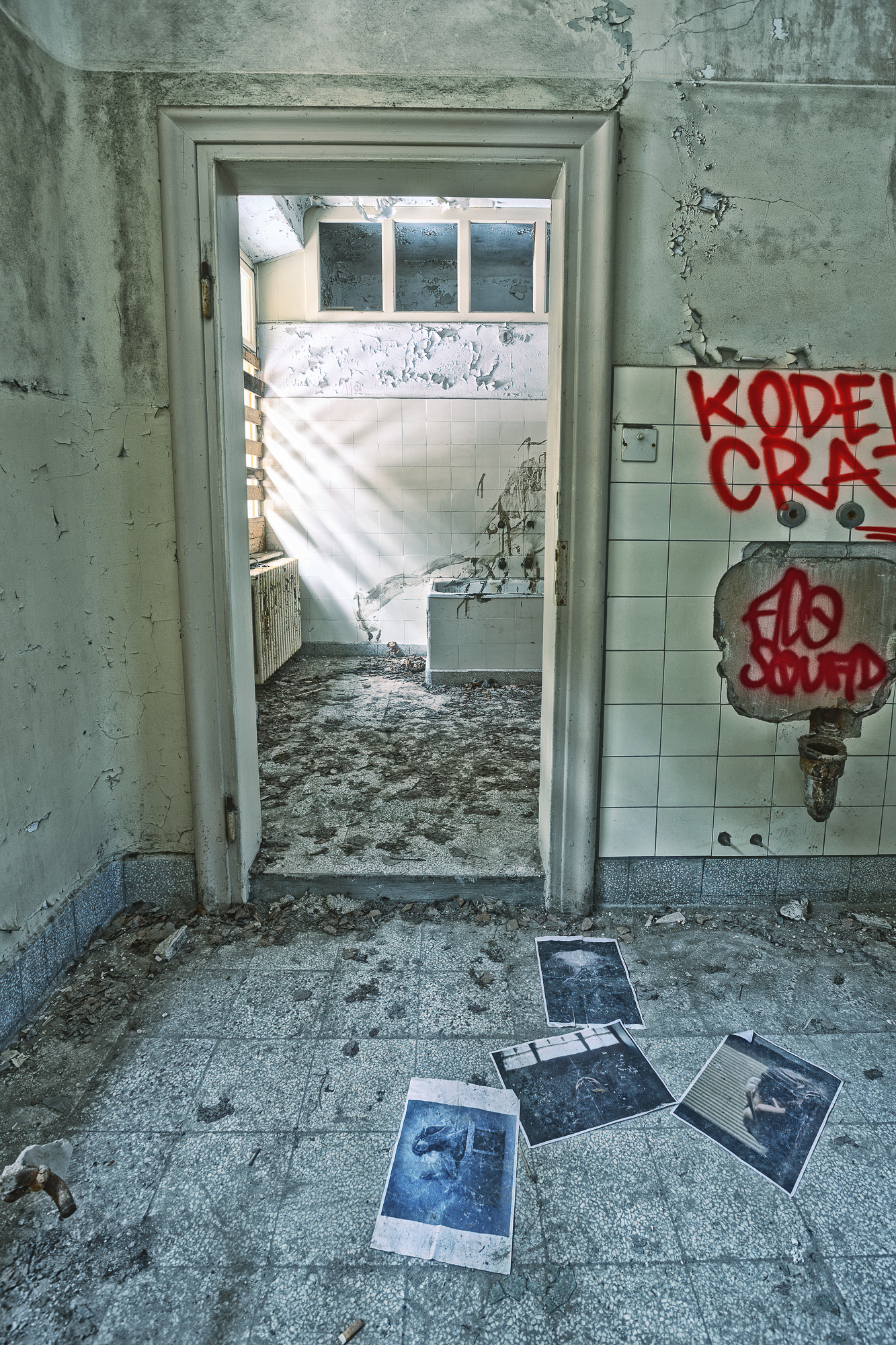 Im 1. Upstairs we went again through the long corridor, constructed in almost the same from the floor plan forth on each floor. As we heard noises from below, it seemingly come out of the cellar and it sounded as if something heavy fall down in a deep hole and pop to metal walls. Something has fallen definitely, but why. There was virtually no wind ... but we did not provide any great importance to this little incident and we felt our way to the very top. Up there where the floor was, who was, oddly enough, much darker than the cellar. A look we ventured into it anyway, but also went relatively quickly out again.

We had what we needed, some pictures, a special experience and the spots for Modelshooting. To all round, we did not rise into the light through the window, Oh no, we are back down to the basement and at a brisk pace in the "saving" freedom also.

The eye contact with our car was restored and we waded back through the frozen-snow and got ready for departure. One last look to this gigantic building, with the certainty that we will see it soon, I started the engine and we continued, Eastbound... to be exactly in the beautiful Grisons.

I will of course report soon about, what we did there.