Pilatus is one happens to be one of my favorite places in Switzerland. There are so incredibly many great spots are worth getting to photograph again. Not to mention the extraordinary views over Switzerland and beyond. The goal this time were the annual Perseidenströme the most 12. August to a climax culminating ...

I was very happy and very pleased, that my Pilatus Railways have sponsored a gondola ticket to the very top and thank you equal time with Marco Thali for! The ride to the top is always a great experience, with many wonderful memories of days gone by, like a movie that takes place in my mind's eye as if it were yesterday and future events will be meeting right here again. In advance I had arranged with Orestes for the night on Mount Pilatus. An absolutely brilliant Photographer great person with whom I very much am traveling! He worked for many years already with the Olympus systems, really in many areas fascinate me very much and he now Ambassador for Olympus ... and rightly so! Look necessarily with him Facebook beyond or on the official Olympus see page order only some of his great works.

A rough plan existed beforehand with Orest. Arrive, sunset, Perse Iden, Sunrise... very roughly 😛 and it would also have a few other photographers have to be there, who have signed up. But in the end we both stood alone up there and immediately went out to the above-mentioned rough plan to restructure. But as so often, one can only to a certain point design. And finally, it is also what among others then constitutes the charm on all projects, after a lifetime accompany the spontaneity and the many little surprises that you as a reminder, as before in the gondola when Backflash ... so it always has a meaning and its own advantages, not everything through and plan by, but simply make!
We checked our equipment and looked again at the weather apps, because at the moment it did not look so rosy. Again and again, thick clouds and fog crept in the sky who wandered back and forth with great speed. We did not let us grieve them and jabbered querbeet on various topics and then headed slowly on the way to the first spot. The object, or rather, the prospect of desire was, of course same time the "ass". One of the two mountable summit of Mount Pilatus, that's only open in summer. On the way there, made us an elderly woman on a few ibex attention were staying on the northern slope of Mount Pilatus, even pretty close, so we immediately pulled out the cameras. Unfortunately, I was, unlike Orest, blessed with no long focal length and had to improvise with the 85mm Canon. 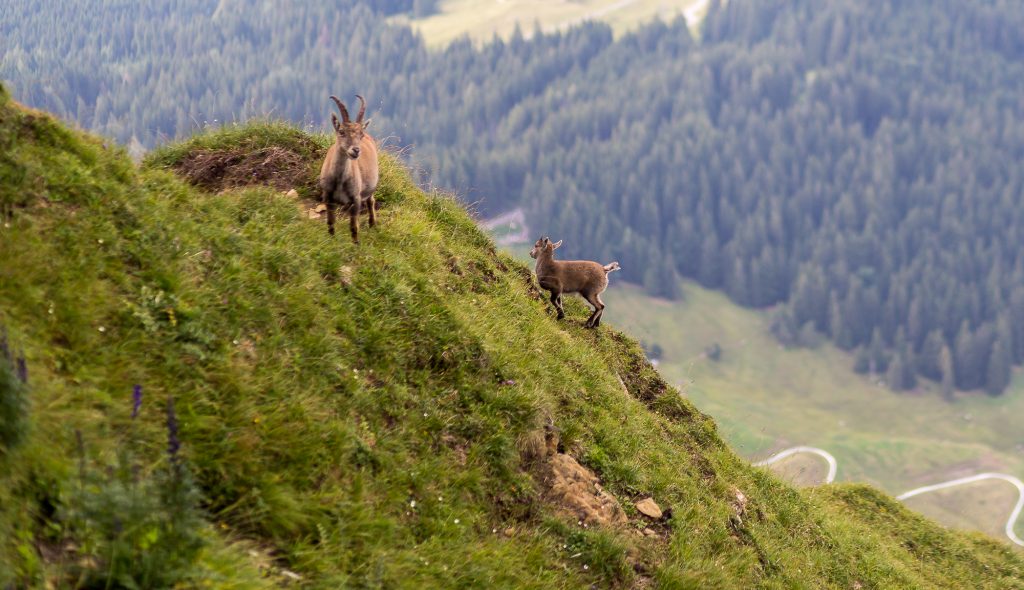 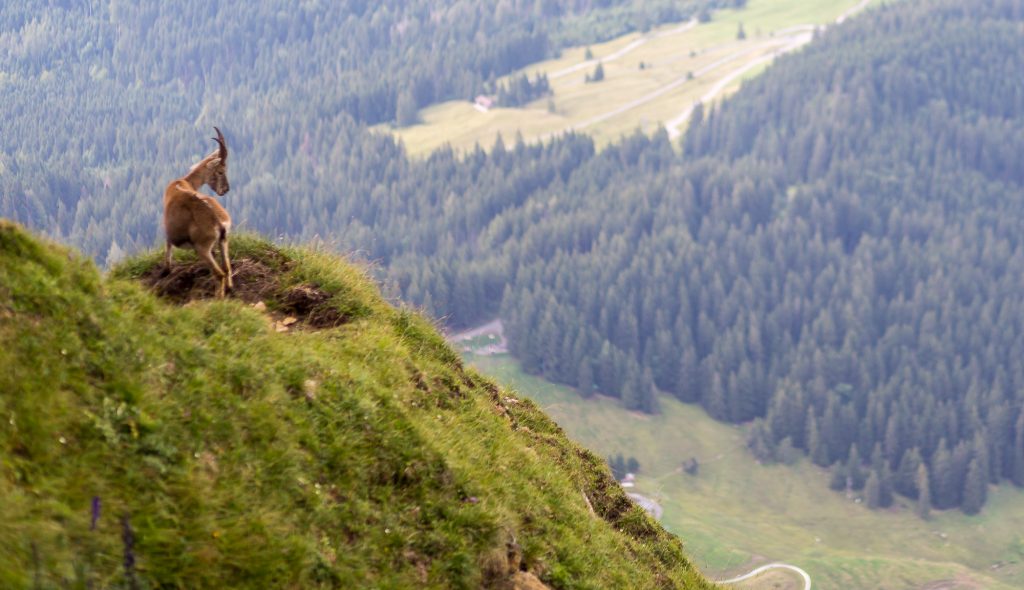 That's why I did not linger too long on this subject and while Orestes himself raged since, I set ever on the way to the summit high. Again and again I held one hand to enjoy the view and the other, to recognize the fine details at this spot. This leading up stairs is generally a very rewarding subject and I had to put a good performance even before this. Once at the top I made some shots and found new perspectives. But the clouds and the fog were was more dense and so I sat down first on the bench and provided finally my stomach ever since the gondola station at grumble. And I had good company from a Alpendohle, with whom I shared a little bread. Very affectionate and incredibly intelligent animals, but no opportunity to skip the whole area fully failed **** 😀 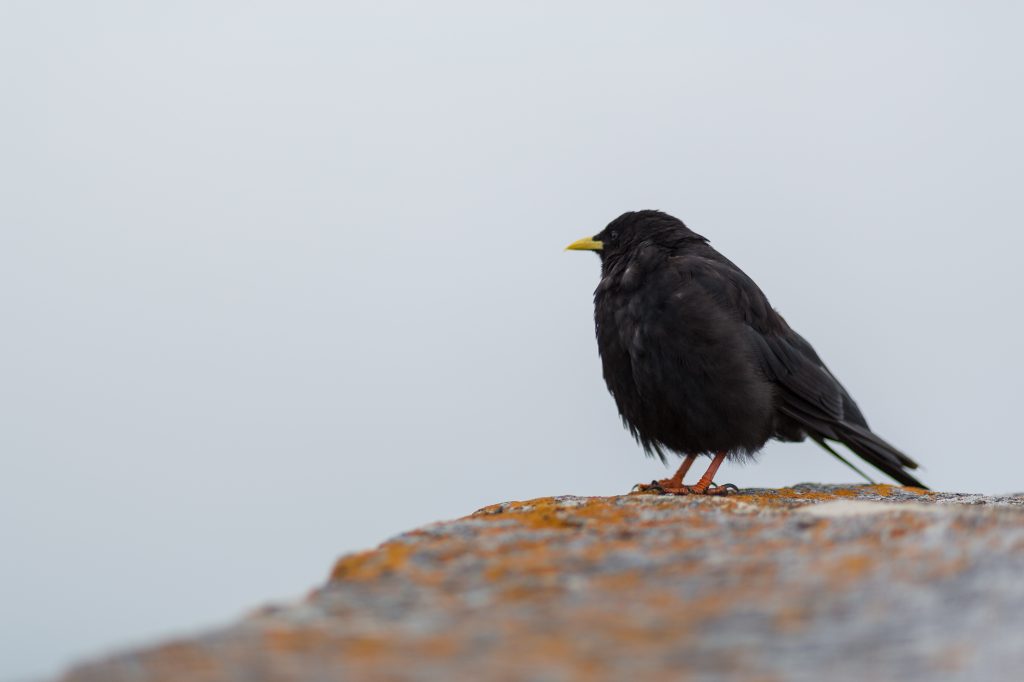 The barely visible sun slowly went down and my colleague had probably enough photos of the ibex in the box, for I saw now as he slowly moved up the stairs to the top. The atmosphere was dull and did not allow that the desired colors formed in the sky. We made the best of it and photographed from different perspectives. Panoramas, macros, Wolkenbilder, individual prospects, Zoom and even some elements for future composing ideas were there. despite fog, created some interesting motives and moods, as to example the stairs leading to nowhere. An icon image for me:
It shows the way in front of you and you know the goal on the horizon, But that remains hidden from all and to cope much, but it will arrive and this is absolutely liberating <3 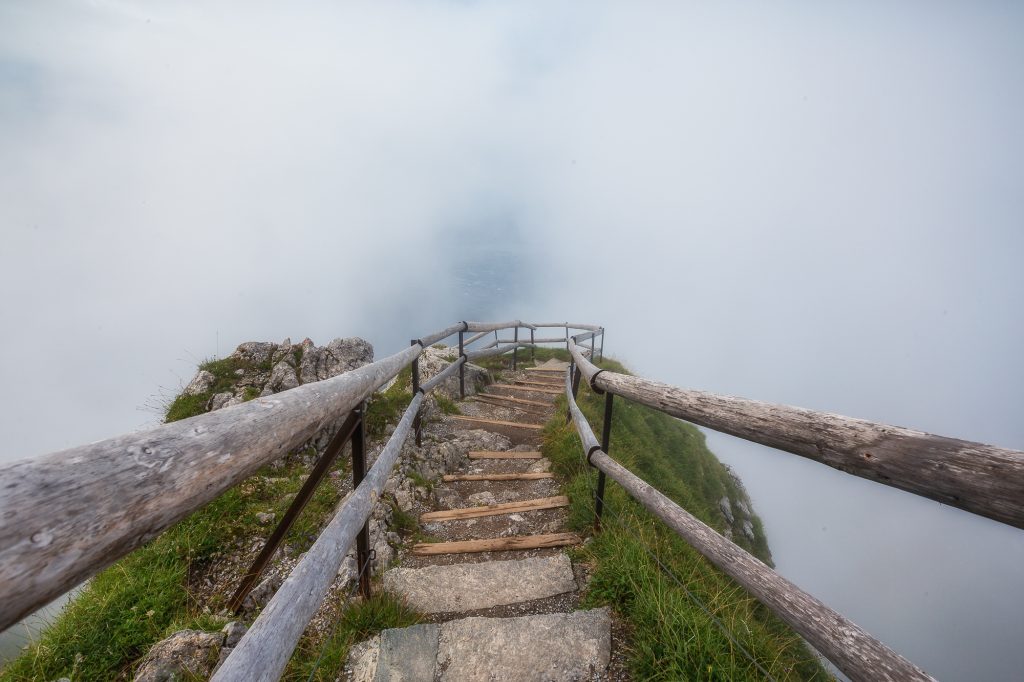 The Blue Hour snaked almost unnoticed into the picture and the hoped for failed to materialize sunset, but in vain was nothing. It created a lot of, sometimes very mystical recordings which I unfortunately can not show all here, because I have no time to sift through all the PC and edit. You know, with me is a large opening, and also a few other projects that I'm creating just the, while you read these lines. But gradually, I'll show you. so check back from time to time here on the blog or with me on Facebook by.

Slowly it got dark and we again studied the weather. Satellite maps promised us around midnight a clear sky, but this was in view of this soup in the sky, currently hard to believe. But always we were feeling positive and went first again on the way down. The city of Lucerne turned slowly the lights on and it was as usual a captivating sight.
The tourists were now gone almost all in your hotel room. The corridors in the large reception area of ​​the foyer, emptied more and we had room to get us two lounge chairs and the associated ceiling. The relaxation was exactly now worth gold, because I was already very early on his feet and not eaten all day, except on the "ass" earlier along with the Alpendohle. Bread and sausage ... Yay, what a diet 😛

We put the alarm for just before to 12 and tried to doze. For me it did not go, I needed a little music to my thoughts in order. Music always plays a big role in my travels. I searched on Youtube for new inspiration and found some good songs the band "Cigarettes after Sex". Tony Anderson was always there and trip hop with cool and gentle jazz elements. And while I enjoyed the sound in a fantastic location, Orest next to me even slight snores gave out, the time passed very quickly and I got up and went to examine out to the sky. Indeed... Although there was still some clouds in the sky, but it was noticeably clearer and the first stars shone through the clouds gaps by ... the beloved star, always trigger an overwhelming sense of humility in me. I took a deep breath and went back to wake Orest. Overslept we packed ourselves warm and went off. Under the hotel there was a small platform which revealed a beautiful view to the south of the Milky Way, off the lights of the hotel complex, so we positioned ourselves ne half hour there to make especially some test photos. Although there were still some clouds but we could 5-6 count shooting stars, two of them quite large cars with smoke trail. The euphoria grew naturally and we even managed to hold some meteors photographed. But the Perseids have their origin in the constellation Perseus the northeast. And that was also our design. High on the second summit, the "head", with direct views of the Perseids and the city of Lucerne. We took all the time for the rise and also made time and again to stop the odd spot to take. 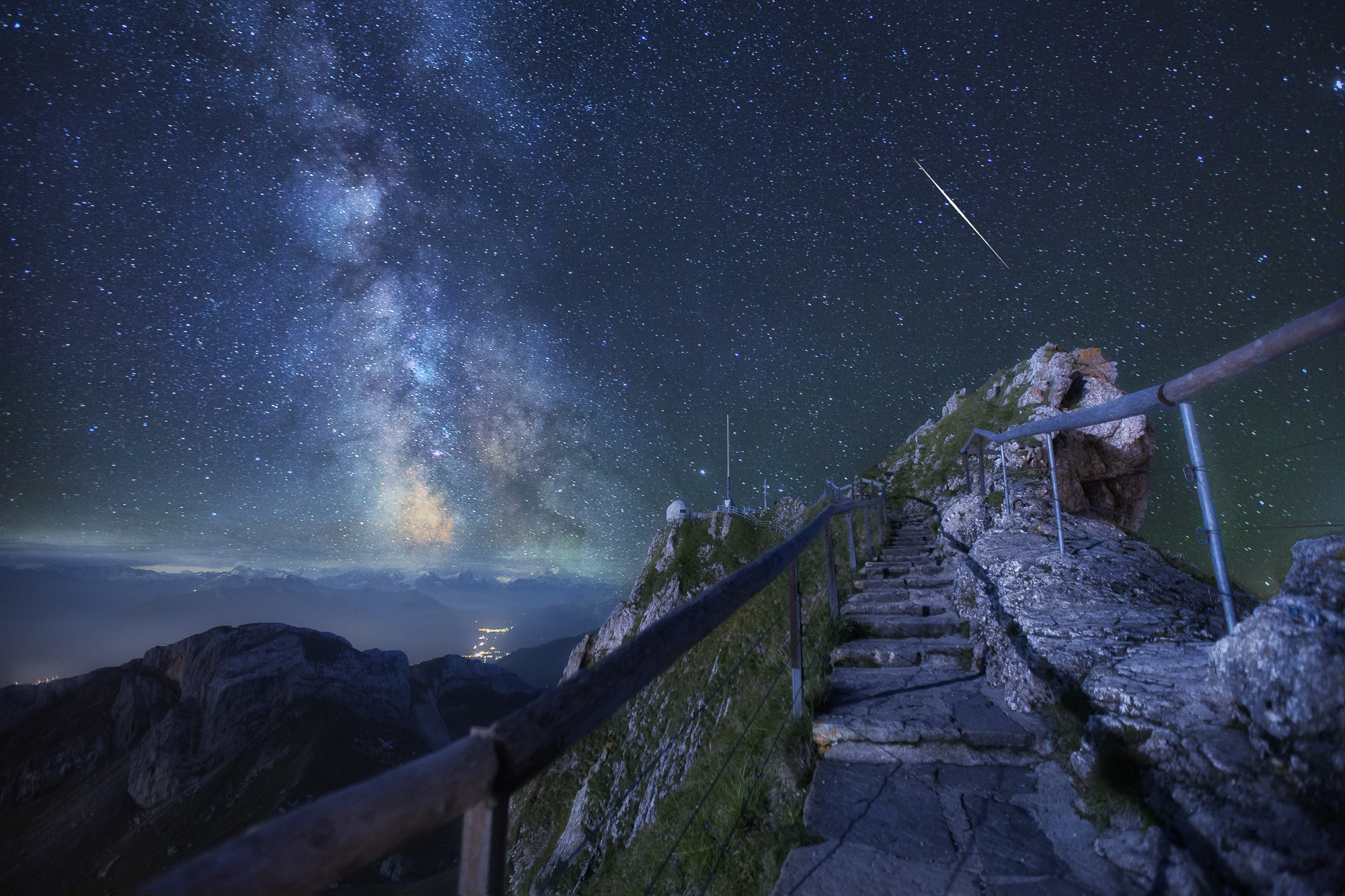 But then we did it but all the way up and set up our cameras for the city of Lucerne and Perseus on. To our surprise, we hardly saw shooting stars, we made countless photos but it was nothing to see. A little frustrating it was. But nevertheless We left our cameras there and they photographed the self-timer merrily. I went back down to my phone to pick up and it's probably for exactly this time happens. Some beautiful specimens mingled with the hundreds photos below and noticed it only at home on PC. 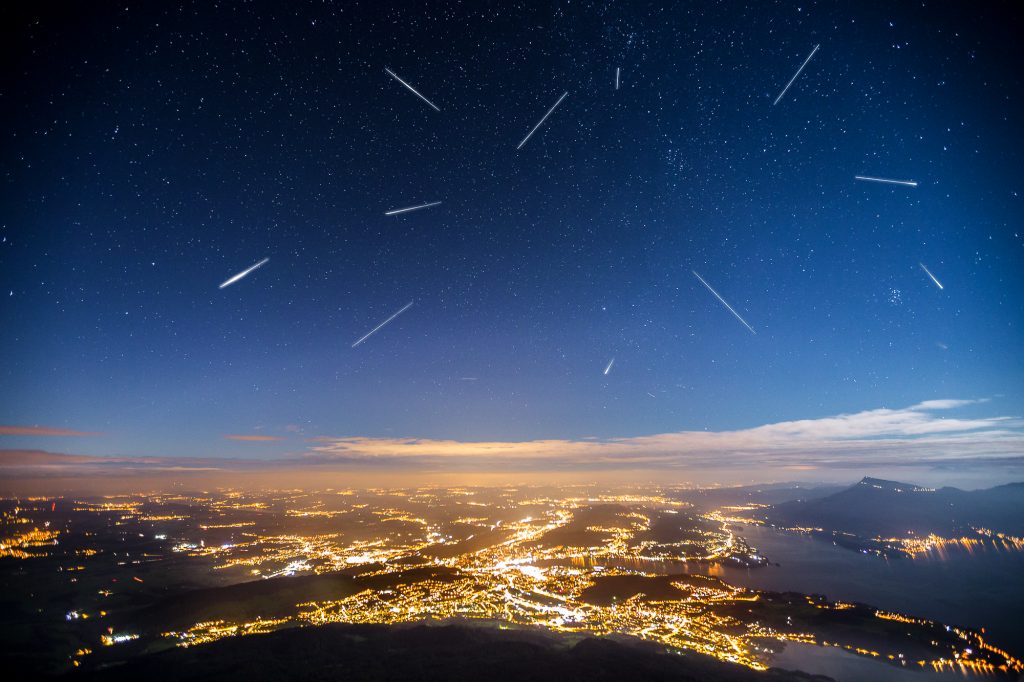 I immediately sat down to the image processing and superimposed the different shots with Photoshop. I was more than satisfied and the images'm happy to hand over the Pilatus Railways!
We only had about a window of 2 hours, before the clouds again reappeared. So we went again back down and lay down again on our Super deckchairs, warmed up and waiting for the sunrise. Who promised to become really good. The cloud cover was not so dense and the sun was breaking through good chances and to cast a brilliant light mood. Now I felt slow and fatigue, the usual crisis before the dawn. I knew it already, and that's why I was feverish more intense towards the first sunbeams. As the evening before we chose again the "ass" and were on the way. But how could it be otherwise well, several other photographers and hikers were already on the way. All with the same thoughts. We were not deterred and had a very clear goal in mind with the corresponding perspectives that we had already checked before. Initially, our hope was still a little shaky that the solar flare affected, but the brighter it was, the more beautiful the light was and so many different colors came to light. We walked around like frightened chickens and tried as much atmosphere as possible to transport in our pictures.

All in all, again a brilliant experience with many positive turning points and always a pleasant accompaniment with Orest!