Once we were at Landwasserviadukt, we sat comfortably our journey and made our way towards the Julier Pass. a strange "coincidence" made us laugh. For this purpose a small Intermezzo:

Last August, attracted my soul mate and I first got together on a tour going on. We philosophized much and actually traveled arbitrary and without a plan through the area. Without realizing it, we were close to the Julier Pass and the fuel gauge was dangerously close to the red zone. I did not know if somewhere up here in no man's land was a gas station and the further we went the more disturbing it became. After a while we saw in the distance actually a gas station and we took a load of the heart. Raussen raged a mighty wind and against the fact that we had summer, it was freezing. We refueled quickly and plunged laughing into the car and off we went. About half a year later, and all in all, the same time, We had the same experience, almost exactly exkt. Tank was almost empty and we are not reminded of this gas station which then showed up well before us, just like our memories. A special moment for us.

When we arrived near the top, we stopped at. A very nice area and also one of the most beautiful passes in Switzerland. But this time it was dark and the mountain slope sank in the dark. The temperatures were around the freezing and would have no problem with our equipment. We parked the car on the roadside on a parking bay and turned all the lights. The car wobbled slightly back and forth and only now we realized what was out there for a strong wind raged. When I got out, whipped me the cold wind mercilessly around the ears and I could keep the car door just in time, before the wind pushed it with great pressure and wreaking greater damage. Often I am here by down but never stopped at the pass to explore in more detail. Now it was dark and we were ready for the dark night with the aforementioned and aggravating factor of this squall. 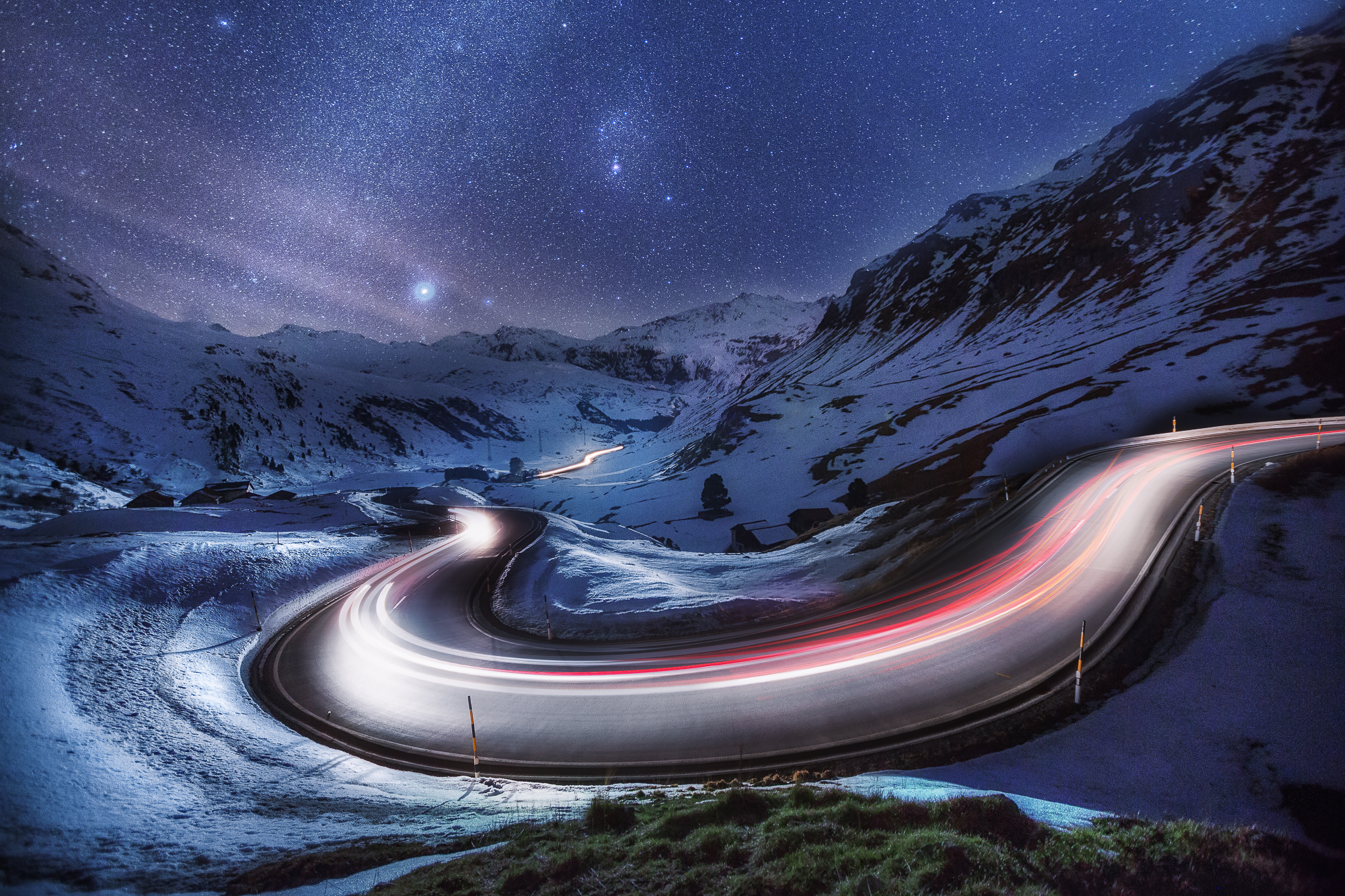 Again and again drove cars past us and slowed slightly. They thought sure what that crazy for two spinners are, middle of the night in this freezing cold somewhere on the roadside of the Julier Pass, which back in the trunk, Frozen suits and moon boots attracted. But that did not mind, on the contrary. It's a very satisfying feeling, conjuring me always smile on my face. Knowing that few expose something to just make a few photos and to stand before all in close contact with nature. Actually, nothing exceptional, we are all part of this world and the nature gives us in any form infinitely back. So I sit and lace up my moon boots to, which proved to be as aggravating. Brand: Massive thick clothes and stooping to bite 😉 I could not help thinking of a warm bed, still reveled around a bit in these thoughts and just as fast as they awake dream came, just as easily, I picked myself up and realized even as I smiled and was really happy.

We walked along the street up to the first corner and went there on the outside steep hill. The wind grew stronger and at times we verlierten when climbing almost balance. Something I experienced last year at the Sustenpass in May. We sat down on a small natural podium and surveyed the scene. Here is the first photo should arise and I set up my tripod and camera, first made a few test photos, hoping that we win the battle against the wind would. The sight was pretty much the south and let my heart beat for the upcoming summer Milky Way.

I shot first a normal exposed shot for the stars. The Orion was almost exactly in the center of the image above the valley and the massive mountains. The road snaked through the picture and I was not quite satisfied with this perspective. it is above yet determined a few good vantage points give that we would still visit during the night ... But things turned out differently 😛

I examined the picture and continued my work. Since it was already dark, I had inevitably some long exposures 10 make minutes, so that the ISO could be kept lower. In the first recording ran at 3 Minutes a car break up the valley and dazzled the whole recording and I had the process. we waited until the car drove past and I started the next trial. Because of the same problem of car headlights, I also broke the next shot, and so on and immediately ... for almost an hour I tried to accomplish my planned long exposure and again I was interrupted by the disturbing cars. It was jinxed! was temporarily because a real traffic and I wondered what the late at this hour still driving around here ... Whether they were all photographers?

In addition still came the wind, But what I'm talking really, it was almost like a hurricane and I even had to hold the tripod, so it is not swept me. That led from time to time in addition to small shake and I had a long ... very long ... over 90 .. minutes. practice and start again, until I 3 was reasonably clean shots in the box. One for the
starry sky, one for the light trail of cars and one for landscape.

Our plan to inspect the area in more detail, was rejected by us because it made no more sense because of the strong wind and the now gathering clouds. In addition, small icicles on my beard already Originated and my girlfriend had become eerily quiet 😀

We climbed the slope gently down again and ran at top speed to the car. The heating was first our goal and once I have them turned on. Really nice place, we will definitely visit and very soon again back to photograph the summer night sky and next time hopefully WITHOUT hurricane.