The next spot was called "White Lake" and was on our list actually quite on top of it. We drove the Julier Pass further up and over the road along. But over us a veil exemplary structure of fine clouds and dense fog formed slow ...

I hoped that it would soon dissolve and a look at the weather map showed us the whole night a clear sky. In fact, there was every now and then starlit to pull back in a few kilometers. This convoluted jumps went well beyond St. Moritz addition, and while we snaking always more towards Lago Bianco, it suddenly became misty ... ever closer. The further we drove up the mountain pass, the worse it got, to the point where I could only go almost at walking pace, so extremely thick the fog was by now. Eventually we arrived at the Ospizio Bernina and parked in front of it. We got out and you saw nothing really, from the lake no trace, and the temperature was unnaturally cold. But here again ... The wind! The few cars that were there, were covered on the driver's side, all with a fine white crystal layer. The wind and the frozen snow from the ground, have truly created a piece of art and it only took a few minutes to even our car as far "prepared" has been.

The plan was to make and retain a pink colored sunrise a few night shots over the lake. But in landscape photography can be only up to a certain point plan and if the weather is so unpredictable turns, since only helps patience and definitely several visits to one and the same spot, until all the factors together perfectly access. but this was not the case and absolutely nothing changed, even after 5 Hours including naps wait.

Slowly it dawned on from day to day. Although we could not see any light source in the form of a sun, the fog was still like a thick soup, but it was noticeably brighter definitely and a bit disappointing we accepted the fact, that there is nothing. We decided to drive us further and that Poschiavo. A cozy typical Grisons town. In fact, the fog dissipated, the further we drove down until it disappeared completely. What was left was but a dull start to the day with a gray dreary skies. We stopped at the station of Poschiavo quickly to a few foods to buy and have breakfast together. to collect and also to our strengths a bit to discuss alternate routes.

There were some places that we have tried to visit, but it was winter time and the routes were closed. Tentative they are definitely for May / June but now we stood there and thought, we again try the Lago Bianco, Finally, the fog was gone and the weather maps gave insight but in a few sunny spells. We drove back up and the more we approached the lake, the worse it got. We practiced our patience and went to the Ospizio us warm with Cafe, Cappuccino and hot chocolate. And passed during the time, really here and there the occasional ray of sunshine on the lake and now appeared slow and vision improved dipped himself. We packed our things and ran the next route to the lake down. Everything was covered with snow and ice lay beneath. Only in a few places you could shine through a few blocks of ice see, shone the glorious blue in the right light. But who were so far into the lake, that we did not dare to walk there. Finally, it was to all the snow the ground did not see and thus was impossible to tell where one would run. The risk was too high and so we looked at identifiable shore a little order and finally we packed everything together and went on ... Bye Bye Lago Bianco, we see you next winter.

The next stop is the Caumasee and so the journey continued. Tired and a bit disappointed but we knew it, that there is perhaps nothing. The trip was planned not through and through, but are made very spontaneous on his feet and that to expect some setbacks, is clear and normal.

Arriving at Caumasee we recovered the first time a little and strengthened us eat with. At the official parking lot of Caumasee we stood for a while, before we got out and we were getting ready for a short hike. Meanwhile was late afternoon and from the unique view, We also took a few photos, before it went down further. to we walked a bit around the frozen lake and were looking for a couple of perspectives into the blue hour capture. It was not planned but we were here now it has come to this and I'm trying to make the best of it. A few experiments would now actually fit well and then an idea developed in my head that I explain to you here equal to closer. 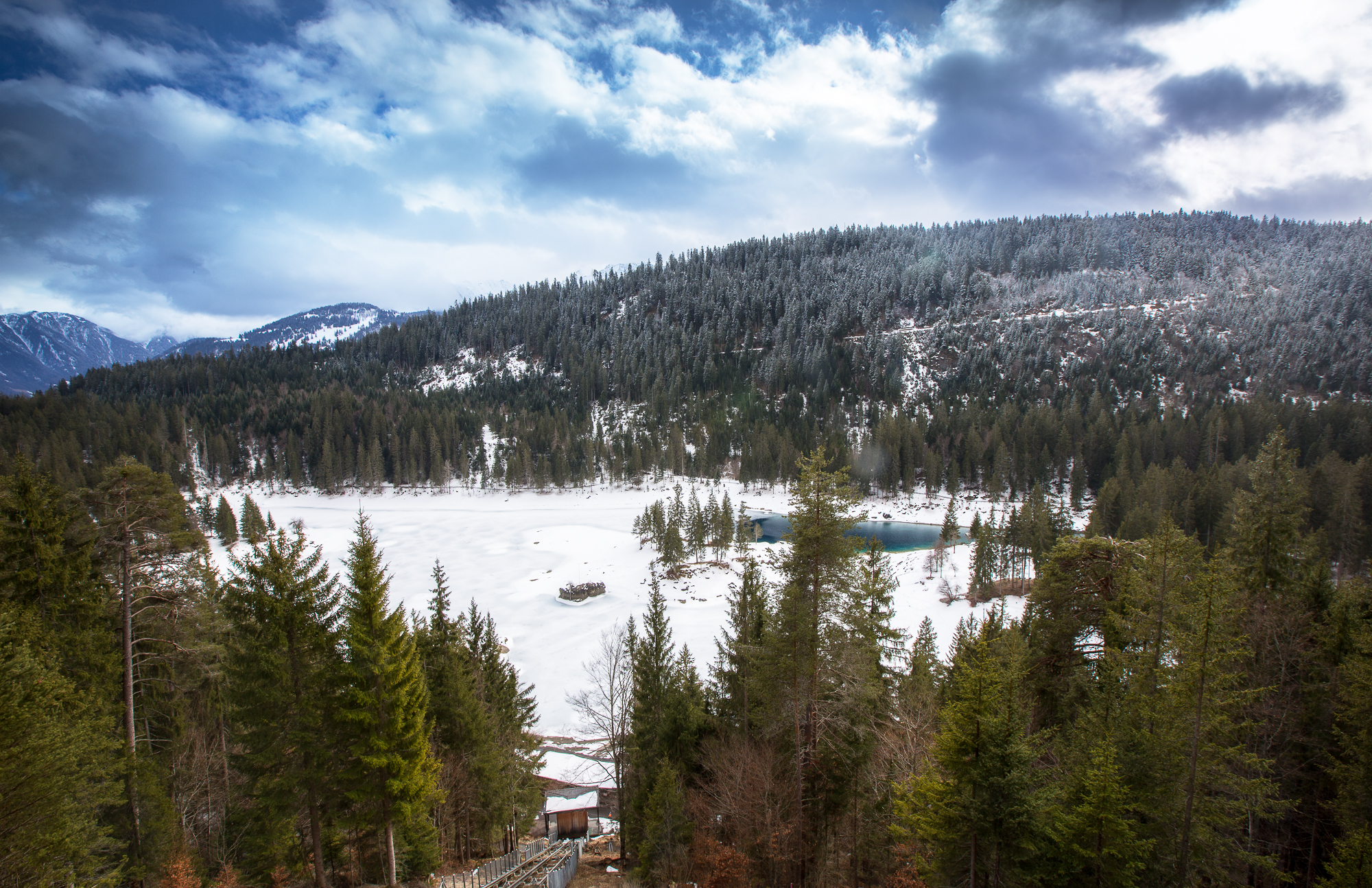 formation: The principle is quite simple. One just needs to have the idea in the head have to be able to act accordingly thereafter.

First I made a panoramic photo of the landscape in the blue hour. The landscape consists of 6 Images which additionally each 3 Images have different focus settings. keyword, focus stacking. so overall 18 pictures.

At night I have a 12-piece panorama made with the constellation Orion and some fog hung in the sky. In addition, I made for each panoramic photo part still specially 5 to to then to stack images later using Photoshop. On one hand, in order to minimize the noise, on the other hand to be able to tease out more of the details. but I did not use for the sky my full frame camera but my astro modified camera and the loop in the Orion region also reasonably be able to show good. Later, at home, there were also quite a tinkering on Photoshop but I hope it was worth it. 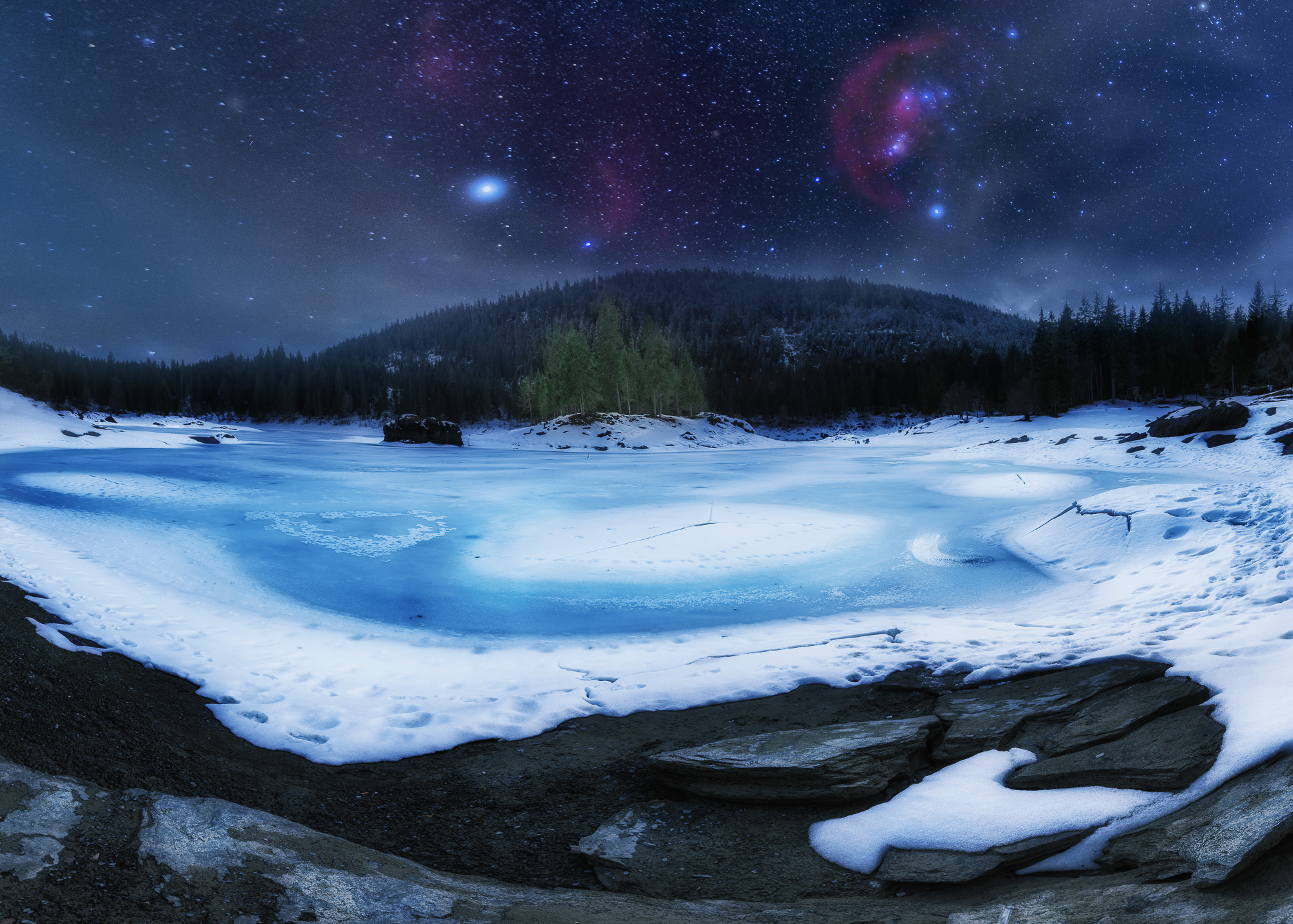 For us, definitely, because ultimately it does not matter where we are, as long as we are happy ... and we were.

4 thoughts on “Escaping the Mist”