After our experience the churning in the Dolomites and the quasi-death experience, at least we got weather technically a quiet night. However, with a very light and short sleep. One can imagine why yes. The next morning, in the morning, we packed it all together and drove off. A few days relaxing on the beach of Italy ... Really?...

Actually, the trip to Croatia was scheduled, But Elena had not the passport, which calls in Croatia. So we moved to the area around Trieste, to be exact direction Duino. Arrived there, we realized quickly fixed, that it is a for our taste, was very busy tourist village. The only of the few sandy beaches, were respectively only by reservation. payments foot traffic. Then we have but have done without, after we have seen, as bodies lined up on body, people fought every spare centimeter. One of the things I personally would never ever do that to me. We walked around a little, explored the beach promenade and finally found a small cove behind a wall, we could lie down for an hour to get some vitamin D. It was about. 11 In the morning and the sun beat quite strongly. The first contacts with the sea water this year, were so incredibly refreshing and I was a few minutes like a corpse on the water.

After a short Board after, we thought about where we could actually go. The place was indeed sweet and adorable for a 10-day family holiday, but not for us photographers.

Immediately I noticed a Bibione, that's not too far away. So we hopped in the car and scurried off immediately.
Well, what can I say, if Duino is a tourist village, then Bibione is the epitome of the tourist city 😛 Especially German and Dutch were to be found everywhere. But the holiday season was still far off, So the beaches should not be too full.

In fact, the first thing we did visit the beach and were suspected as hardly any people there. We took off our shoes and walked along the shore to the lighthouse several kilometers. The waves on the bare feet, tender and soothing broke, was like balm for the soul. Still extremely physically managed by the Dolomites, we reached the lighthouse and put us first go to a little doze, listening to the sound of the sea and reach a wonderful inner peace.

We opted for the next two days to pitch the tent here and enjoy, relax, and of course to make some photos. But first we went to the city in and treated ourselves to a really delicious, original Italian Giant Pizza. God was well! 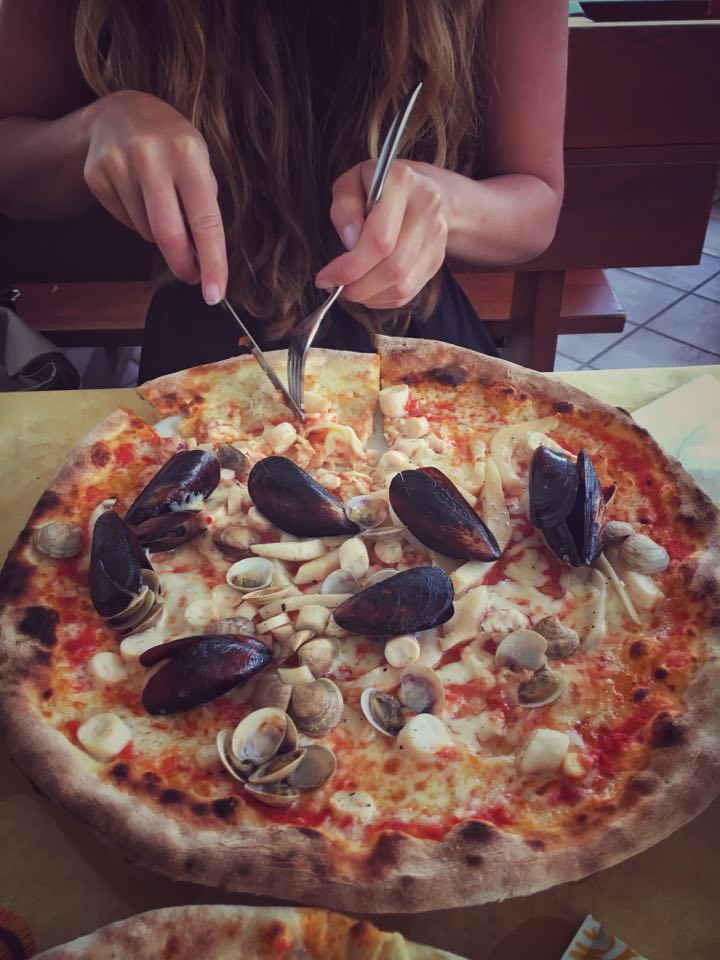 Back to the car we packed everything one we needed, parked the car in a safe and secured place and started walking again. 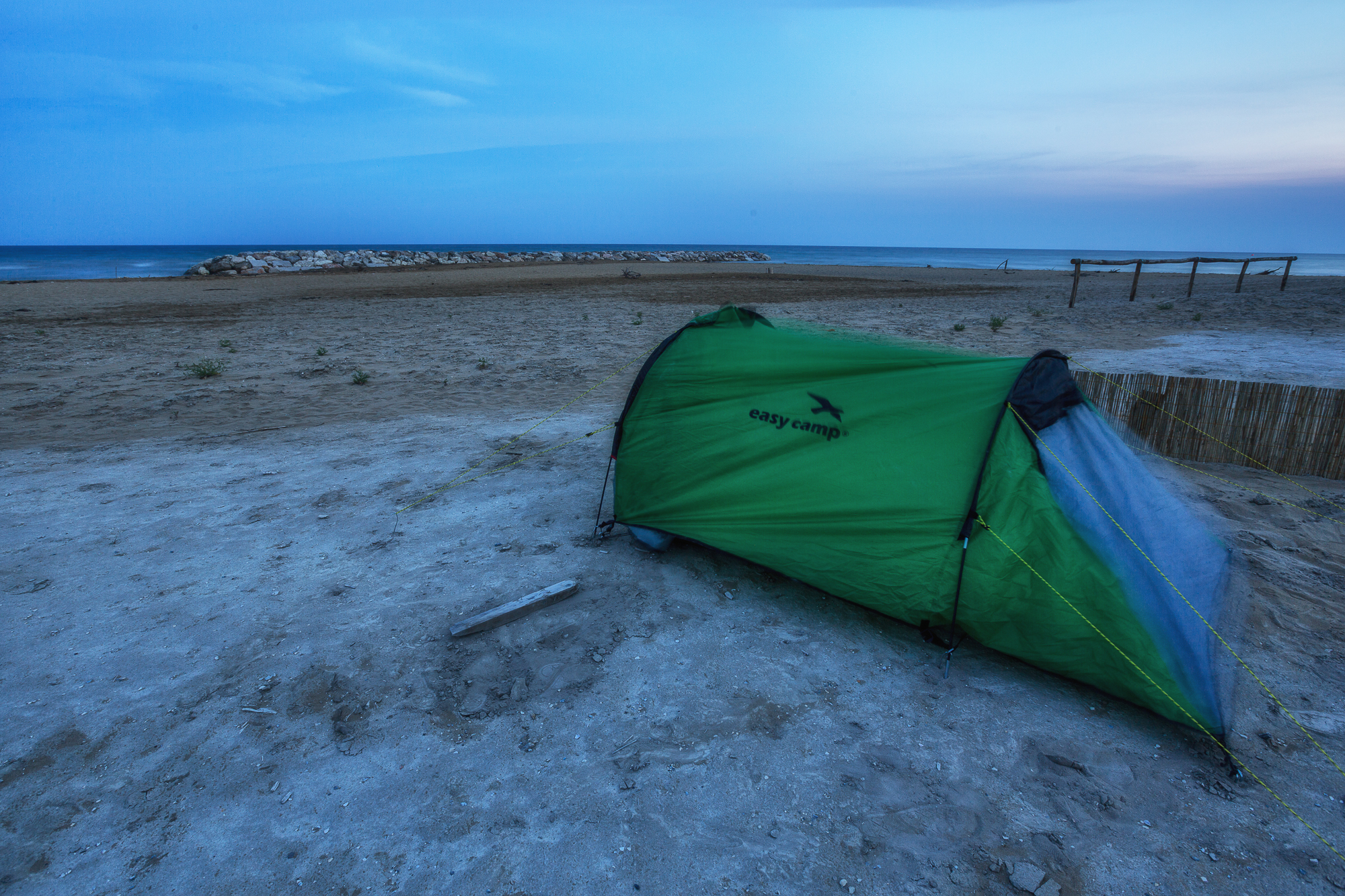 Total tired and drained, but happily we built everything on and lay down immediately ... No few minutes and we were soundly asleep until the next morning. Just in time for sunrise I could take one or the other photo. 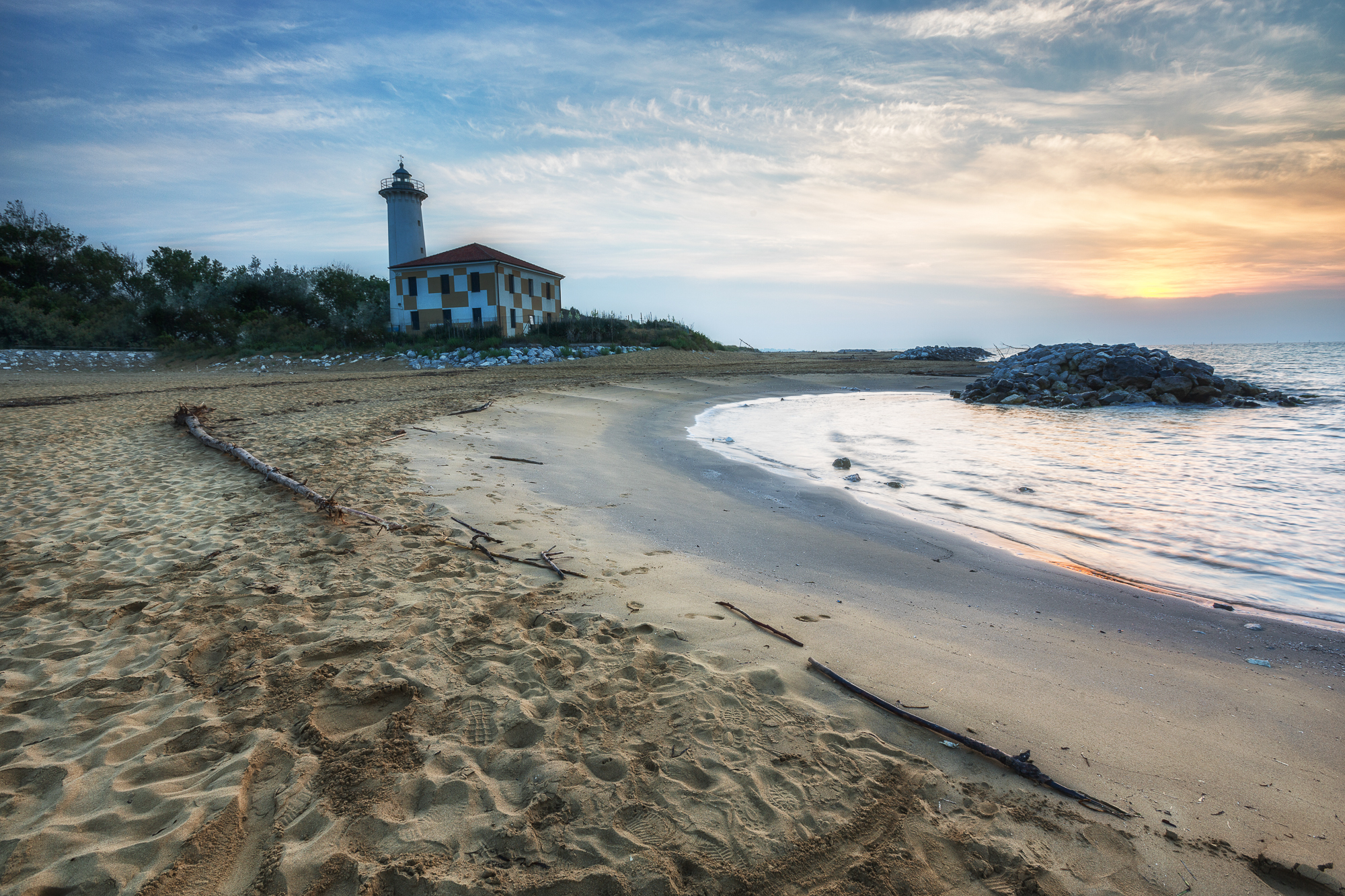 Today was just there to get a tan, swim, brown, go swimming etc. 😀 Just do nothing and people ... how well done <3 The water was amazingly clean, have stretched out of the few cancers that your scissors constantly after us, continuously ready, kinda cute. But the salt water has done so well and we felt like a new person.

In the evening we got ready a few photos of Elena to make. She always looks beautiful, but in this white dress truly like an angel. The idea was clear minimalistic but meaningful. 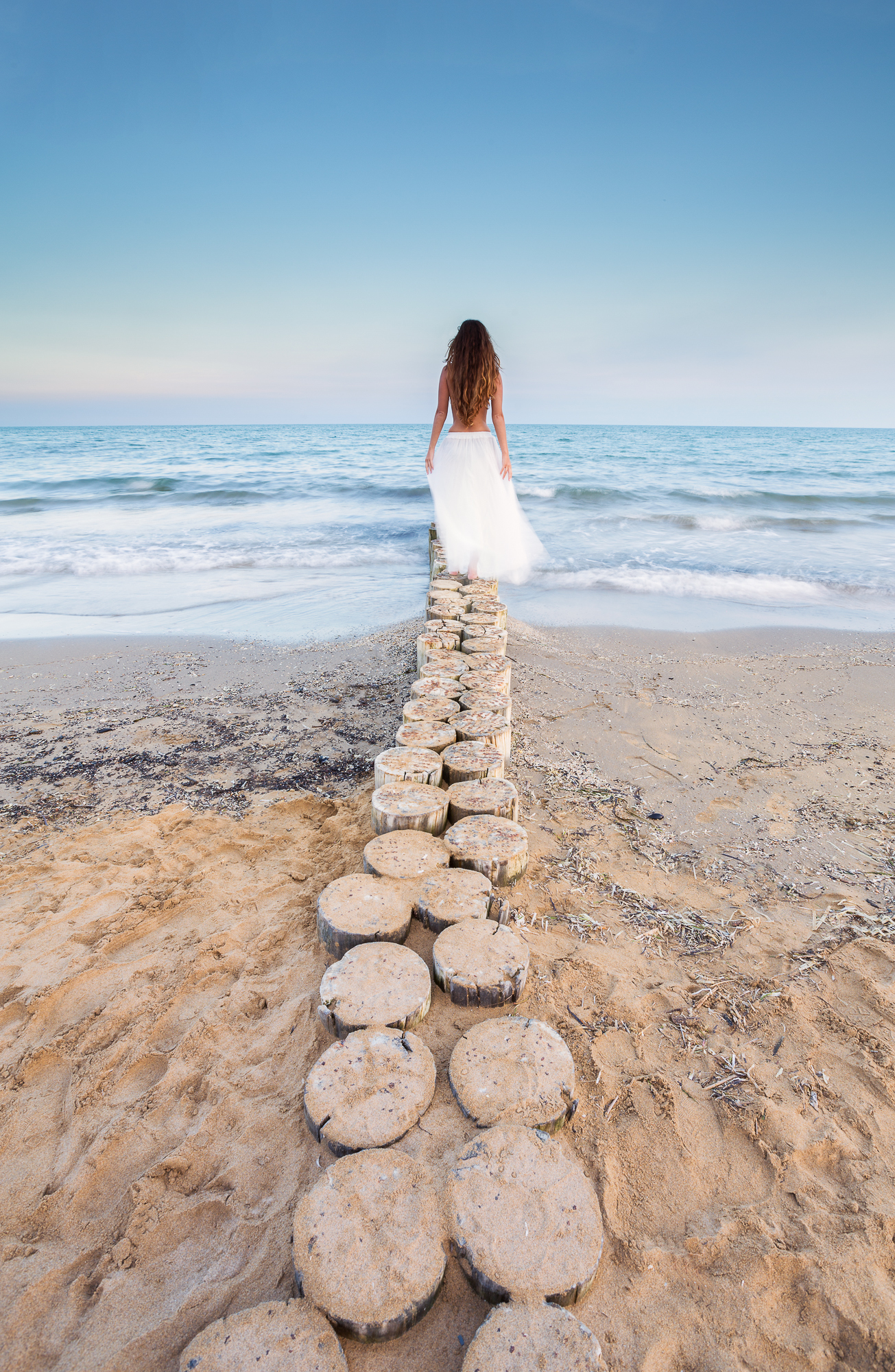 After that, I rushed from one spot to the next to take as many photos as possible, broke during the blue hour. But in the distance we heard something terrible, something a few days ago was almost our death, this noise that we never forget, and in our ears echoed ... Eli was at this time a little further away and could barely see, but I knew immediately that she looked at me and her eyes were probably torn. Listen because that no longer? A massive supercell approached .. Bibione. again a thunderstorm!

And yes... she moved straight for us -_-
What now, we thought? We also wanted to take any chances this time and luckily the car was only about 15 Minutes path away from us. So all good and we waited a little. Meanwhile, it was also dark and the thunder getting louder, the sparkle more brightly ... Alterfalter, it has no sense. pack the most important and since leaving the rest in a tent on the beach. so we ran back again and what was felt in the blue hour already, was now more violent ... the wind. But among all these unfortunate conditions, there was but one or the other positive. One of them in the form of weak flashes of light in the air, we stopped briefly and observed the environment around us. Fireflies we had long ceased to observe and now they were there and accompanied us all the way back to the car. Once there we sat in and observed the cloud development. It grew louder, of because the calm before the storm, but it seemed as if the cell hanging just there and not move. We decided to sleep a few hours in the car and when we woke up, she was actually pulled further. We quickly packed our things and went AGAIN all the way back to finally take the Milky Way. They shone relatively weak on the horizon, which was also not surprising. Finally, Italy is not the country of choice for the Milky Way Photography. Europe light pollution reached here a new peak. But some information I was able to tease out yet. 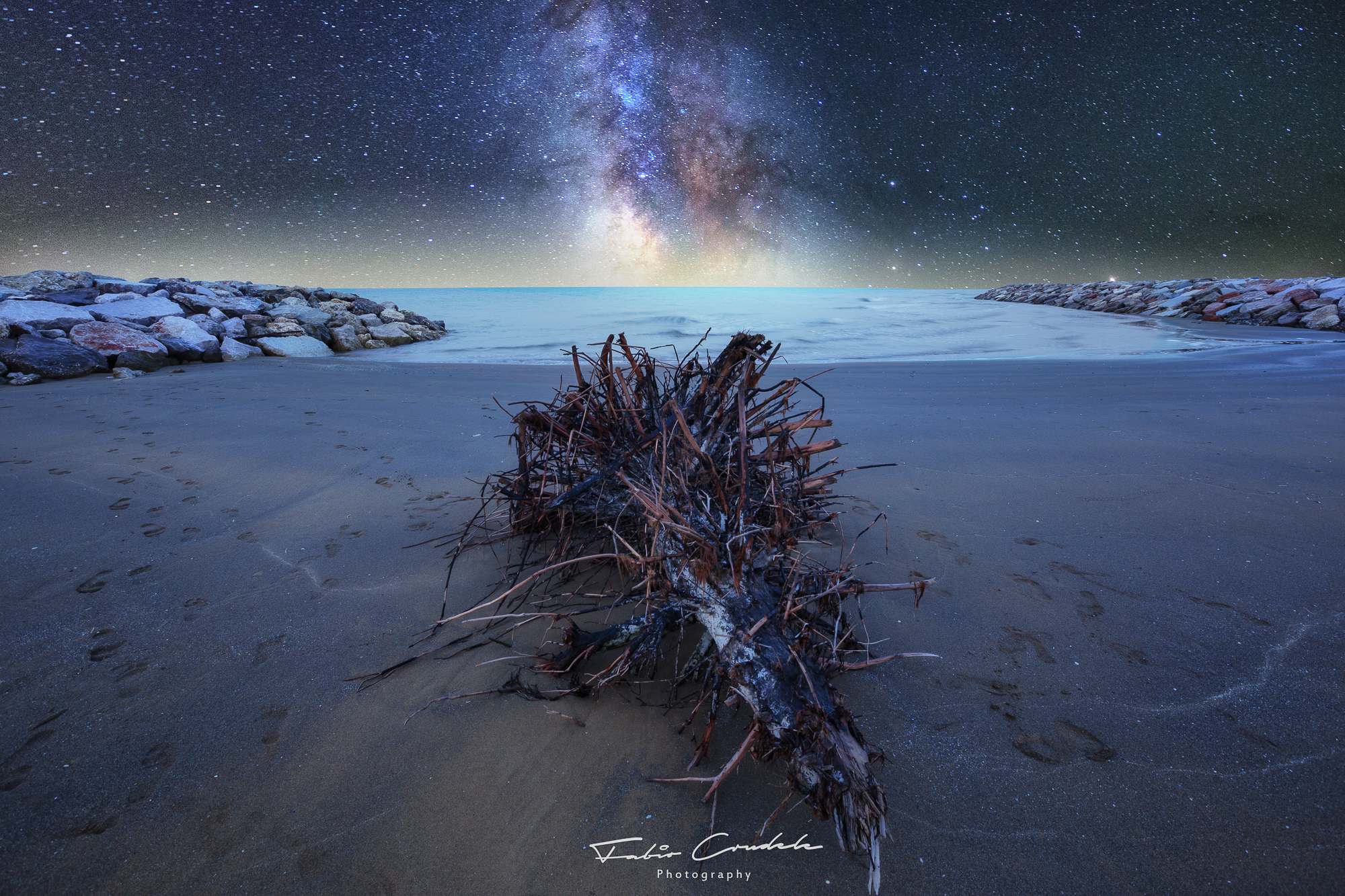 Eventually we went to the tent to catch at least a few hours of sleep only to find the next morning, that we have massacred the mosquitoes. And there were no ordinary mosquitoes ... genmanipulierte, disgusting little beasts, that would have sucked even a horse.

We looked again to the sea and said goodbye and thanked us for this adventure and took the journey home.