It is now almost the end of March and the Astro photographers know what that means! exactly, it will be cloudy 😛
nonsense, it is of course the start of the Milky season and this year I have the great honor and joy as Ambassador for Olympus and Vixen, to have two perfect Gears here ...

The first clear night long and no one takes away from me, So I packed my things and drove to Lucerne hinterland. Specifically on the border with Bern near the wonderful Emmental. My idea was, to combine the peak of Schrattenfluh with the arc of the Milky Way. But primarily the Olympus or. to examine objective and the little travel mount. Accompanied me Philipp Merki, who has already booked a workshop with me and a very pleasant personality and ambitious photographer is.

We met in Schangnau, or as we respect it "Shanghai" have called, a metropolis in the canton of Lucerne just under 900 population. Anyway, we drove from there a little bit with the car in the mountains, as far as we could, made possible until the snow then no Continue. We parked the car on the roadside and explored first the area on foot and found some wonderful spots, the optimal underlined the beauty of the area.

Of course we were 2 Hours there too early and we used the time, to test our equipment. For my part,, I tried the different lenses from Olympus from. there would be 7-14 mm with an open aperture of 2.8. A dream of a lens and currently my "immerdrauf" lens. The great wide angle with the light-strong panel, is a real treat for landscape photography and opens up fantastic opportunities. The night sky, the quality of this lens is in its full force. Knack Sharp star almost to the edge.

The other lens could I test is the fixed focal length of 17mm with a unique and fabulous open aperture of 1.2!! To my knowledge, the brightest wide-angle lens on the market and an absolute sensation. Of course, this had to be tested in the night sky and slightly dimmed on 1.6 and only 10 Second shutter speed to ISO 800 the stars are here again to the edge of point-like with an excellent sharpness.

Mind you, it was 10 measly seconds and a low ISO choice, in addition, the panel was not even openly. The potential of this lens is beyond anything I could test so far and opens up many new possibilities.

But as time passed and the arc of the Milky Way emerged slowly over our heads and quickly we packed our things together, to run to the previously selected spot. A hill of a really wonderful view of the Schrattenfluh, the valley and the Milky offered.

enough tested, Now it really picked it up on the actual scheduled recording. The small but absolutely accurate tracking of Vixen was used and was quickly mounted on the specially provided tripod. .. The polar alignment to Polaris. Well, what can I say... a simpler system there are not comfortable with this procedure. Without exaggerating, has all 15 lasted seconds. The Polar Star was perfect in the small peephole positioned and I turned off the tracking of star speed a. The Olympus camera and 7-14mm I mounted on Vixen Polarie and directed by ball head to make the cam on the Milky Way to the first test photos. At 7mm I tried first to expose a minute, Stars were points.. all clear, we increase times the exposure times to 2 .. minutes. still points ...
3..4...5 minutes, I was excited, There were no lines and the structures of the Milky Way were increasingly seen. at 6 Minutes showed up but then slowly slight streak-like star. But that was not even on the Polarie, but on my 15-second turbo polar alignment. If you look there takes a little more time and perhaps even with the polar scope, the Extra can be bought, so a very high accuracy is ensured even at longer focal lengths and speeds well over 10 Minutes be possible.

I also tried other settings, be it with the tracking, as well as with the camera and within a short time the two devices were a strong unit. The whole mechanics merged perfectly with the Olympus camera and a perfect match for the Milky Way Photography.

But I had to hurry with all tests, For the day will break, that's for sure 😀 and at least one panoramic scene I want to capture on the chip. I chose the Milky Way ever 8 to take pictures, 4x as the lower row and the upper row to 4x per 3 Minutes exposure time and an aperture of 2.8 and ISO 800. I could also adjust even less ISO and longer exposure times, that would definitely be optimal for the noise even better to get under control, but there was no time. 8 x 3 Minutes are, after all, but almost half an hour, which should not be underestimated. Time passes relatively quickly and the Astronomical Twilight also occurs quickly.
In the Blue Hour, I still have the recordings made for the landscape which were then used for Timeblending.

Conclusion:
It's like a little love story, the Olympus and the Polarie harmonize perfectly together and I've had all that night within a short time under control. It is so intuitive and very straightforward, I was pretty self Baff. And when Astrophotographer I know very well how important it is, that the equipment is top needs to be and you as little time faced with obstacles and problems.

I'm really looking forward to more trips and travel and quite soon it comes in a distant land with high standing in the sky Milky Way middle of a surreal landscape. Stay Tuned!!

.... I almost forgot. I offer for the summer Milky Way workshops and individual coaching sessions. What is new is, that you get an introduction to the same Vixen Polarie and so soon see yourself and learn can, how easy it is, to make long-exposure photographs of the Milky Way. And if someone is interested about the Timeblending technology in Photoshop, there is also a 38-page tutorial download, where everything is explained step by step ... If you book a workshop with me, there is the tutorial course free of charge to. Just come clean. I look forward 🙂 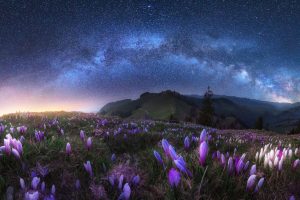