It was long planned and yet we are spontaneously set off. After breakfast we packed the things, the car loaded, still got a few little things and then made us immediately on the way. At this time we did not know yet what to expect, but we felt that we will never forget ...

... We were in a good mood on the trip and so very excited about the Dolomites. Mighty mountain ranges looking for their peers in your uniqueness. Planned were still a few days at the beach, because although we never were in the Italian mountains, but we knew that by subsequent hardships urgent relaxing on the beach was necessary. But first we went on the road to the Grisons to the border of Liechtenstein at this crossing and arrive in Austria. The journey through this country was very interesting, with scary great mountain landscapes which are definitely worth visiting even one day. But now we did not have time for before us lay the Dolomites and we were completely focused on.

Towards evening out we saw on the horizon the first peaks of the region and we were looking forward to it very much. We made a short detour to Dobbiaco Lake and also a little explored as the environment, even some photos landed on the memory card. For too long, but we did not stay at this location, because it is not long until the 3 Sentences. Slowly it became dark and when we stood before the road barrier that led us up to the desired spot, we decided, a little further down the " Lake Antorno", Rest appeal and cater for us a little. I wanted to see for the first time in daylight the area necessarily.
In the inspection of the small lake, was a small sweet bridge on me, with which I intend something at night. What exactly?... I show you very soon 😛
We made ourselves comfortable in the car and snuggled a, because the temperatures dropped extremely rapidly to 8 °.
But how could I actually be able to sleep? Just a few kilometers, 10 Minute drive and I would see the battlements, the unbelievably beautiful scenery of the Dolomites. Granted, I was excited, but the fatigue has taken the upper hand and we fell into a light sleep. 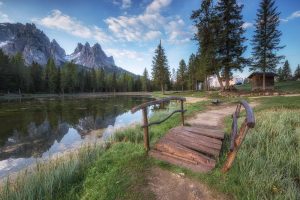 At dawn, I grabbed the camera and ran again to this small bridge and took a few more shots of it, before it then really took off.

The track was curvy and extremely steep, but when we got to the top, really caught our breath! Such a powerful panorama as I have rarely experienced. Where to start only :-D. I took some pictures from different angles and points of view and had to warm sun, already some 100 even pressed the shutter.

The parking lots were standing right at the foot of 3 Battlements towered mightily about us. But we only saw the back of the summit and had to do now slowly ready for Wanderug around it. The whole photo equipment and an additional backpack 6 litre water, Cover, pillow, tent, Sleeping bag, Food and other small items Survival, which ensured us a pleasant and safe stay in the afternoon and through the night. 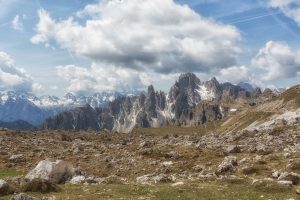 We decided the eastern, to take longer trail, which could be followed cozy at first, but later it revealed a fairly steep climb. On the way there, we got to talking with a few other hikers, us told that the paths above still a lot of snow and this may result in dangerous situations. We were taken and concentrated and above arrived, was actually a short section completely under the snow. An excavator just cleared the path freely and we ran up the slope, through the white blanket, to go further back in front on the cleared trail again. 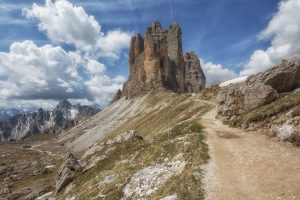 Far ahead was the famous chapel which is already visible in some photos. Since we did not want to go, Instead, we walked down to the valley, pretty close at the foot of the battlements to explore the area and to have the striking peaks in front of us. After finding a suitable place, sweaty, tired legs, small sunburn on the face and extremely thirsty, We set up our tent and settled ourselves. It was now about. 13 Clock and realized only now that we 2 hours were on the way. An incredibly large region and exactly at that moment I thought to myself:
Now, if something would happen, we could get no help. The car was on the north side of the battlements, far and wide no man and a mobile phone network there was not up here. I brushed the thought away quickly and as we had very little sleep last night and the ordeal far us some abverlange, we went to the tent for a siesta. It was pleasantly warm and peaceful ....

It thunders loudly about us, we woke up, watched yet totally but sleepy-eyed and crawled out of the tent. What we saw there was really incredible threatening, from the north, a huge thunderstorm cell reared, the slowly moving south ... So right at us. While I was still studying, slammed it close even harder and louder. In more distant we saw a few people, who fled at a fast pace on the west side before the storm.

I did not want to risk it to be here, the massive supercell built faster and faster over our heads and we had to react quickly. dismantle the tent again would cost us valuable time, So we decided to make it back. Just take the camera equipment and the rest we have thrown into the tent.

But the extremely long and tiring eastern trail we did not want to take and decided as for the western route. We climbed down and followed almost in a fast pace the small path. We had really a little scared, as it flashed around us and so thundered extremely deafening, a formidable and fearsome power formed over us. We felt the first drops of rain, and even ran faster. The noise did not stop and the distances .... incomprehensible, it took so long to get from one point to the next. Panic spread on itself. We had just 3 sleeping hours, and the slopes were also getting steeper and our forces were now already at the limit. Still totally overslept, came .. the next dilemma to. Hagel! We started running, but what is breathing with the? We had in this hell again and again a few seconds gasping for air and then again to escape a few meters. So many things went through my mind, I had metal objects with me? Shall we settle chew somewhere and wait? And once again a huge bang, taken in front of us. My treasure disappeared the forces and I grabbed to pull your hand around it. Every time we came around a corner, we hoped to see in the distance the car park, but nothing since ... it was so disappointing. The road is incredibly long! for a little more than half an hour we managed, totally soaked we had to go through the last effort and create the road up to the car. I could hardly breathe and the heart was beating me already out of the ears. Key.... Where is the car keys!?

Elena made the car doors and looked at me with a death glare, but saw a smile. The little luggage we had, we threw into the car and immediately ourselves, because the thunderstorm cell was now directly overhead!
But our A and exhalation was louder than the thunder out there and we needed a few seconds to calm us! We looked at each other and burst out laughing 😀 We survived it!

We spent a couple of videos of the flashes, the more hours resume, to dry us, perform damage control and over again to check the weather maps ... The tent was or was still out there and I want it back. Besides, I am also come here to take the Milky Way and I let myself but not with such a hippie thunderstorms distribute, Oh no, damned.... Wait until it's over and then we start running again, the whole ordeal again but I felt deep in my soul, that it will be worth it!

The evening was approaching, The storm was slowly but surely past us and to the west, the clouds and the sun eased also managed to break through increasingly. After careful consideration and newly collected forces, we started again a try and ran the way back ... What we thought Spinner, but yes we are <3 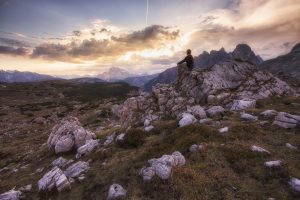 Not a soul was to be seen, but we were the only ones we have drawn the! Again and again, with the view to the sky, we tried to elicit how the weather develops and be extra careful and comfort we walked up to our tent. It was still there, and this force of nature has defied. When I consider that I for just 50 had acquired Swiss francs, was but a brilliant investment. And it had to in the course of our journey again prove. But for more soon. 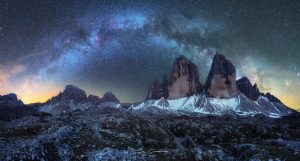 The deep blue sky now revealed more and more and the clouds moved on or dissolved easily in. The tent we also again and the Milky Way may now quietly come. We were confident and now very positive about. We spent the night quietly and peacefully in the tent and I could .. complete my recordings of the Milky Way.