After we got to this very spooky place in Ticino were, we drove straight towards the east, one to be precise in Graubünden. A canton that I have to my own shame really too little frequented have. But it will definitely be caught up in the future ...

The little trip wasn't just there to take a few photos, it was also a journey of discovery, to seek out new places, integrate new future plans and we found what we were looking for, and how! In spring / summer I will, amongst other things, to be found very often in Graubünden to implement my ideas.

The first location we visited was the Landwasser Viaduct in Filisur. A huge structure that has been 2008 is on the list of UNESCO. We started quite late from Ticino, so that was the logical consequence of it, to arrive there at night. We first drove to the village of Filisur to notice after wandering around a little, that we drove a little too far. As a result we drove back again and quite inconspicuously on the right side there is a larger parking bay at the beginning of a forest. We stopped there and had a quick look around, compared the maps and realized that we were already quite close to the railway bridge.

We strengthened ourselves with a little finger food and hot tea and dressed a little warmer.. a little bit is an understatement 😀 the temperature was around zero and my freezer suit and moon boots are always nice with me. Elena was in one too "Michellin males looking" Ski suit packed tightly so we checked our flashlights and started walking. The river on our right rushed and from the bushes to our left it rustled again and again. Probably hares or deer, but one is for sure... I love it! Nature is always so real and unadulterated, you feel at home ... until we saw this huge illuminated construct before us, the river below flowing through and at this very moment a train that passed over it and illuminated the entire area, so suddenly the spectacle could be seen, so quickly it evaporated and we started looking for a couple of good places to set up the camera. Because the pillars are illuminated, this spot is very grateful to photograph it in the dark. It allowed shorter exposures and low ISO values, so that I could depict the foreground relatively cleanly. But more on that later.

From the composition of the picture, I liked the point with a view to the south, but especially because of the fact that it faces south ... yes exactly south 😀 And what can be seen in the south? exactly, the summer milky way! And that's why I'll be visiting this place again in the middle of the year.

That night the sky was streaked with persistent veils, so I first took a few test shots from this and that perspective and while taking pictures, I was bubbling with ideas, because also to the north the Polarstern can be seen exactly above the viaduct from a very specific viewing direction. For me that meant, of course, start trails and the beautiful wooden bridge in the foreground ... really fantastic and is definitely one of my favorite places to take pictures of the stars in Switzerland.

I would like to show you one of many photos from that night and give you a few tips on technology, both for the practice on site, as well as editing in Photoshop. I hope I can give you a little support 🙂

The practice on site:

As already mentioned, it was unfortunately already dark and my approach is very often different, but taking well-exposed landscape pictures at night is absolutely possible, especially when the area is already quite well lit., like here at the Landwasser Viaduct. First of all I looked for a good position and took some test photos to see if I liked the perspective. The camera remains firmly on the tripod and is very important, Nothing should be moved until all photos are in the box. In this case, I created a dark exposed image, just to show the lights correctly, which are completely burned out with a very short exposure time. I have the next shot 25 Seconds exposed in order to be able to depict the stars well. At first glance, even the landscape looks relatively good, but appearance is deceptive. Not only that I have an open aperture 2.8 used and thus the foreground inevitably loses its sharpness, but the ISO was on 3200 set for the stars. If you zoom in a little, then everything is totally noisy. So we come to the third picture. This time I have the ISO on 800 posed, the aperture 8 and the exposure time 8 minutes. Because of the closed aperture, everything stays pretty sharp and the low ISO in combination with the long exposure time, gives us good starting material. Of course the stars are totally warped now, but that's exactly why we took the previous star map.
If those 3 Pictures are in the box, May the tripod be moved again and so I did that and tried several positions.

The image processing in Photoshop:

Of course you can with these 3 Images in various camera settings do not yet start and only in Photoshop do ingenious possibilities open up.

The first thing we do is open up 3 Photos as a layer one below the other in the following order:

- Above: The dark exposed image
- Not: The 8 Minutes long exposure
- Below: The star exposure 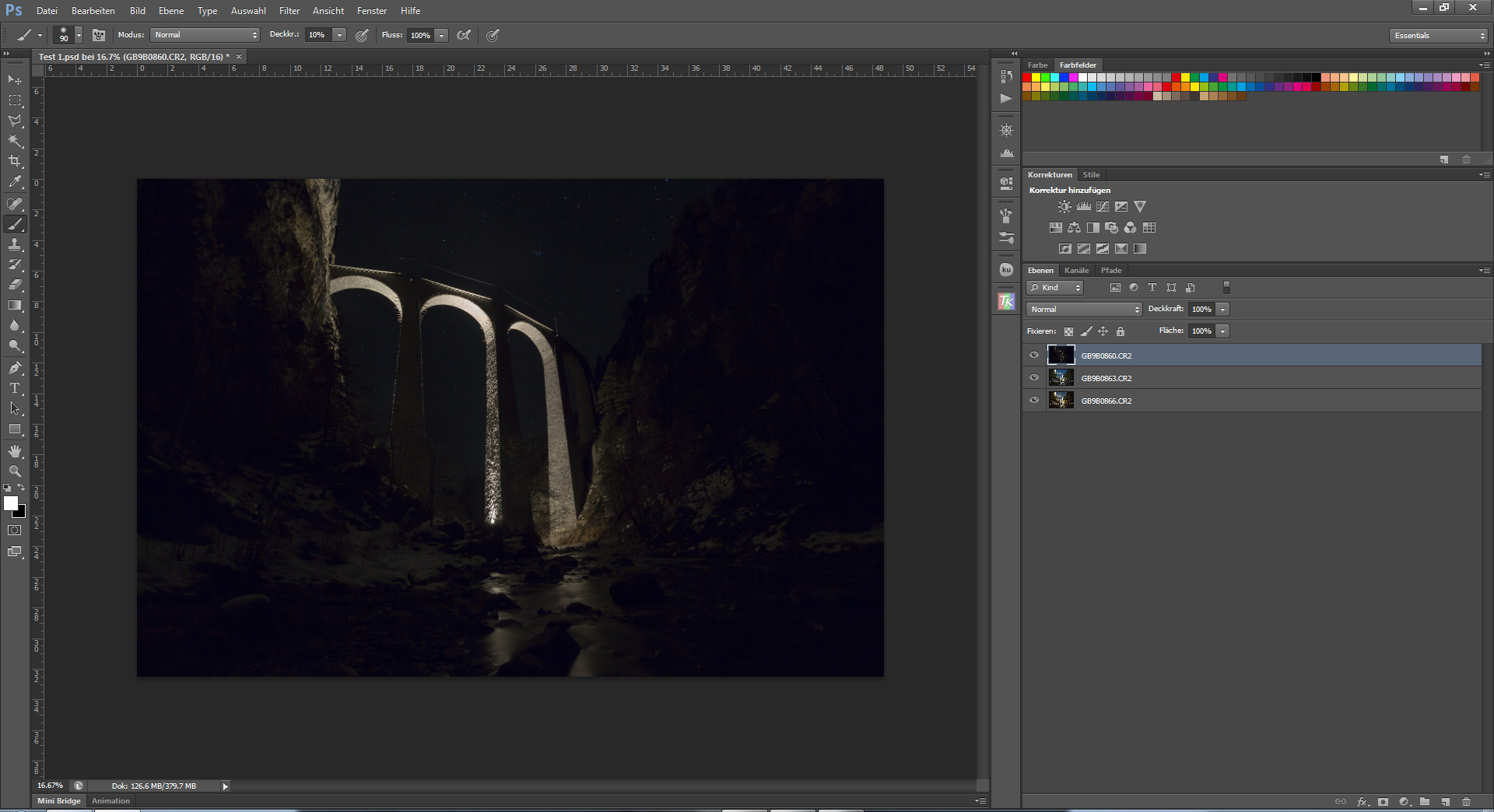 Now we will first focus on the dark image and then with Alt + Mask icon to create a black mask. The dark image is immediately replaced by the photo below (Not) and now we can with a soft brush tip and a low opacity (5-10% carefully color in the light columns and bring out the correctly exposed image underneath. In this case I haven't painted too much, because I wanted to keep the luminosity up to a certain point. 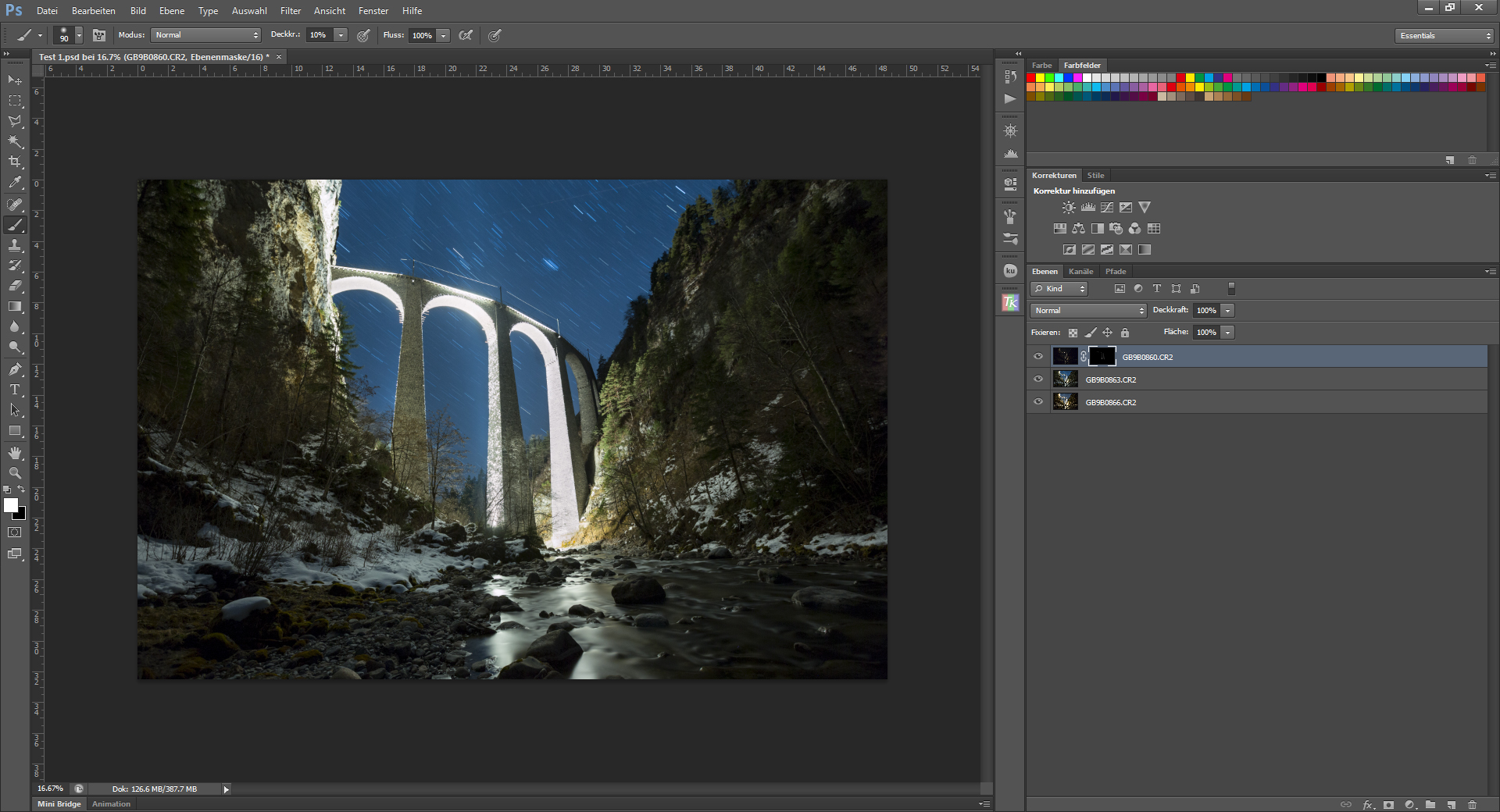 Next we put the middle picture (Long exposure) on active. But this time we create a white mask. This does not change anything in the picture, but if we use a soft brush tip and 100% Just paint the opacity over the sky, the correctly exposed starry sky appears (Below) and we can then carefully bring it out. 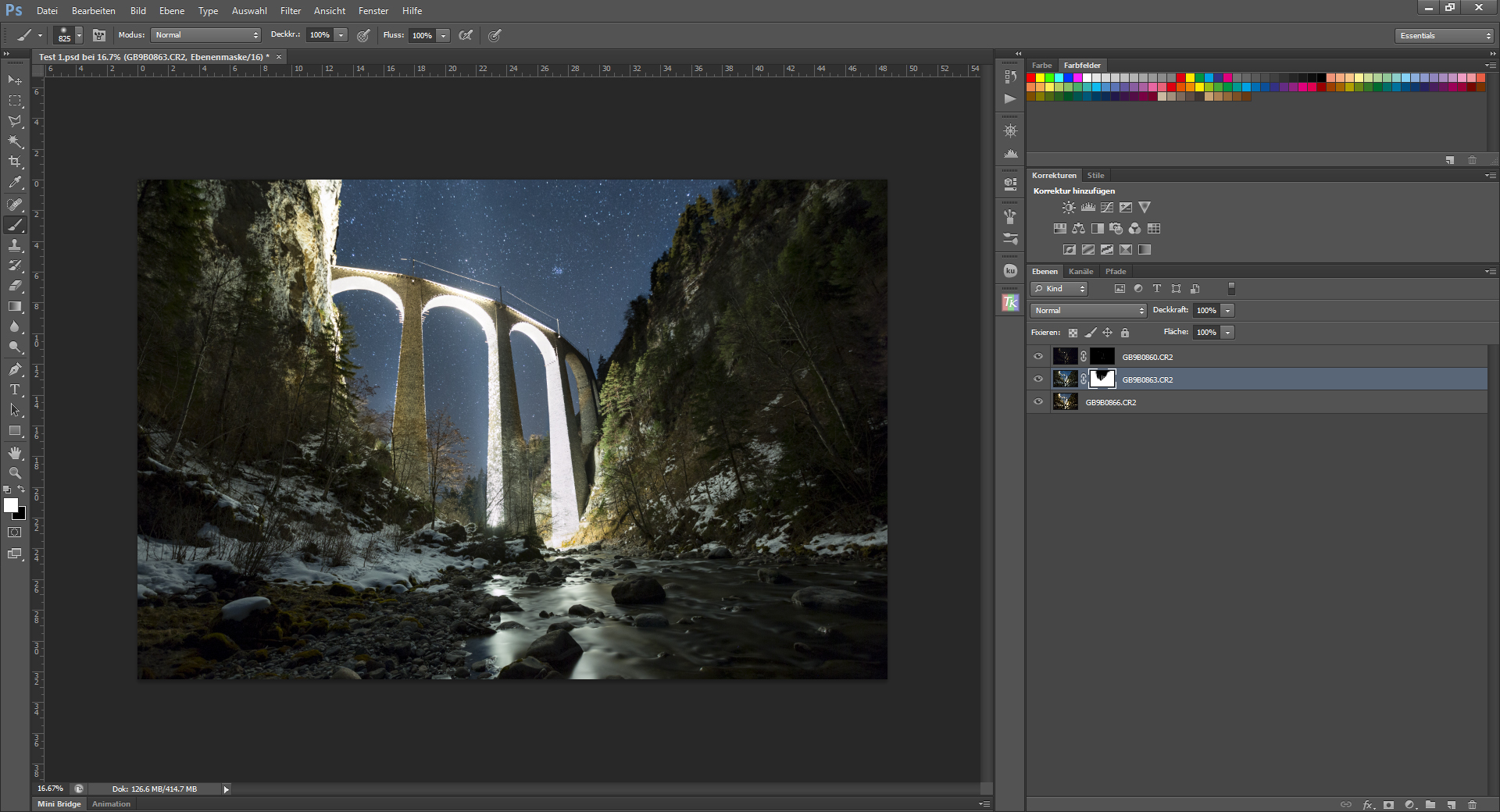 So the picture is perfectly exposed on every level. The pillars of light are not overexposed, albeit close to the limit :-P, the starry sky is displayed correctly and the foreground is perfectly exposed with practically no noise. From here on there are no limits to creativity in the workflow. 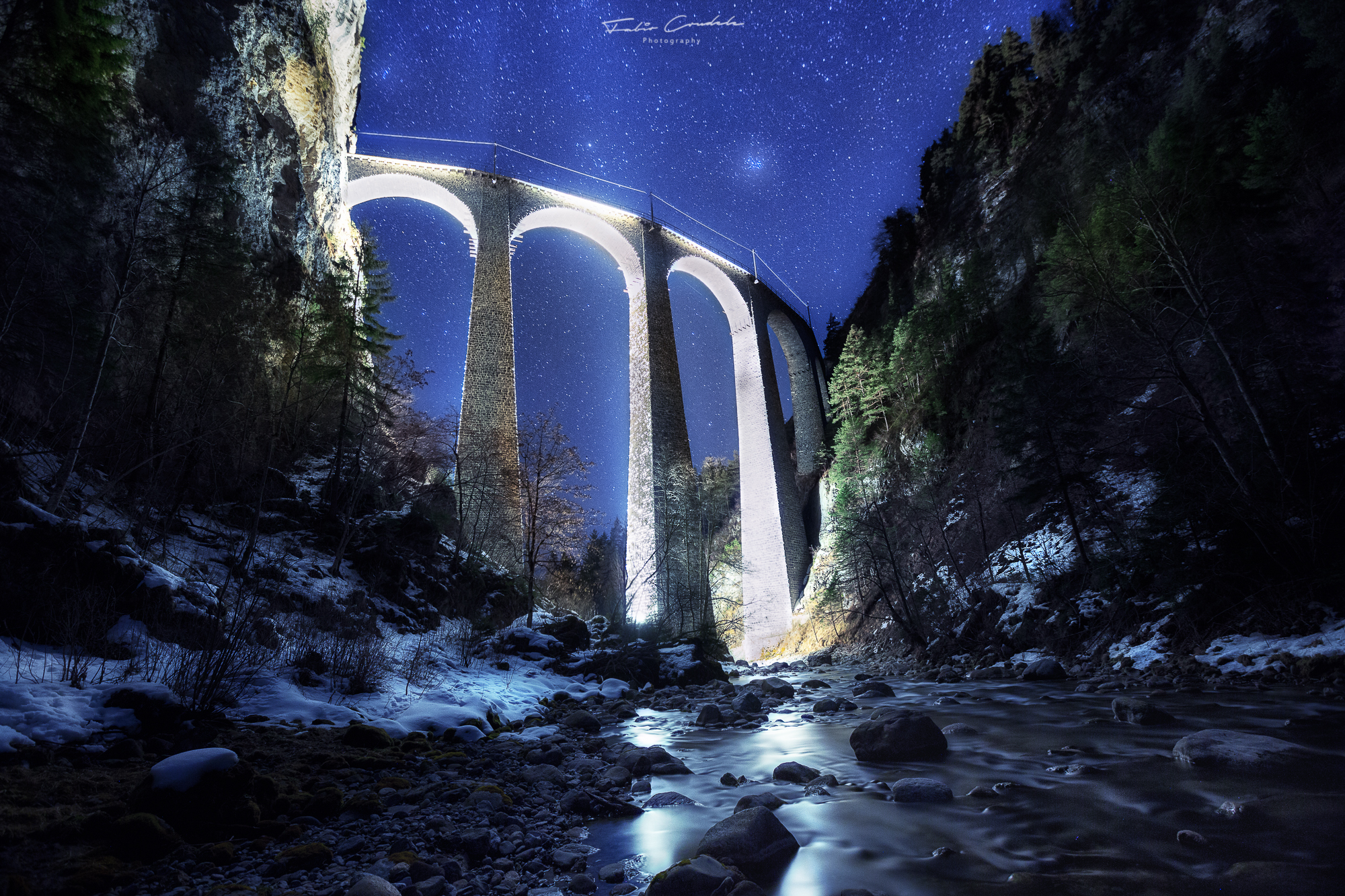 At this point I would like to draw your attention again, that you can also book image processing coaching with me <3

I hope the tips were useful and you can apply them to other situations as well.

2 thoughts on “The light bridge”