The Colors of Autumn

Autumn held this year a lot of beautiful, sunny and warm days in store for us. During the day, blue skies and night starry nights. On ne whole week. The shouting yes out for a few photo trips and even a deep-sky project I could start. But first things first 😀 The Blue Lake was my first stop ...

Saturday morning I researched again spontaneously a little about the Blausee, checked the distance and it amazed me that it just 90 km away from me. But 90 km are to be expected a little different in Switzerland, everything here lasts much longer. So I grabbed my two beloved kids and my wonderful Elena and we were on the way. Along all the way, we all marveled over the fantastic scenery. Everything was dressed in in an autumnal Farbköstum and I prefer wanted to stop every minute with the car and take a few photos.

After one and a half hours we finally arrived and at first I was a little shocked. I have to admit at this point, I've never been on Blausee but what we saw there was a little strange. A snake au cars middle of the road, congested parking lots everywhere, Coaches from different countries ... it was full of people, and even a ticket price had to be paid 😛 I suppose to some research, but frankly I do not do that too often. If I had to place the first time visit, I do like to surprise in order to let the environment affect me and to yourself to discover the details and to experience this philosophy of landscape photography. nun and the, The situation there was a little different. We waited almost half an hour to the parking attendant us finally to a narrow niche piloted. I squeezed the car with some maneuvers in there and got out to the other queue at the box office to examine. People wherever you look, from anywhere they have come.

When we anschließten us the serpent, we realized that not a single German speaking. French, Spanish, Russian, English, Italian and some other languages ​​I could not place. German was not represented but that was not matter. It was plain to all visitors. Thoughts came up, as it probably looks at the lake. So big it's not that people were able to distribute reasonably well. There, now we were here and there was no looking back, would anyway have no option. I want to see this lake and enjoy with my favorite day.

My son noticed in any case immediately that it was a fishing paradise. When "alter" Rabbit in the field of marine life he knows his way around extremely well and he can not joke about a hundred different freshwater - recognize and saltwater fish and bennennen. his eyes light up and he recognized from a distance even the fish shop.

The road to the lake is truly a very short but I surveyed the area very well and I wanted to like to immerse themselves literally in the landscape. Simply indescribably beautiful. But arrived at the lake killed us the beauty of the Blue Lake. The color was so incredibly realistic that we gasped. This rich turquoise mixed with bright green and blue tones in combination with the orange, yellow and red autumn colors of the trees. Really a dream! But what we naturally do not like, is the fear that we had when we arrived. It was completely full of people. A hotel & Restaurant was to our right overloaded with people. In the meadow on the other side of the lake, were filled 100 People and warmed up to, the further flocked around the lake, a real traffic and I thought about what I should do now here. The first thought was:
Stamp, stamp, stamp in Photoshop!

But who am I, to say that many tourists here were? On the one hand I can understand that yes, it really is a very powerful and unique place, you should definitely visit times. On the other hand, we were also visitors and thus part of this mass. We also have to bear our contribution to the overcrowding.

We ran first go and made even a walk around the small lake. We were looking for a few good spots and was able to remember a few perspectives me, I wanted to tackle. My son saw on the way a few fishermen and immediately contacted those in contact with talk shop. He stayed there and tried to explain to the astonished anglers what they were doing everything wrong hahaha.

We went on and finally arrived at the bridge, I've noticed when researching home. Since I wanted to get an idea. I tried a couple of positions and perspectives, and it was all so beautiful. But then I chose this. 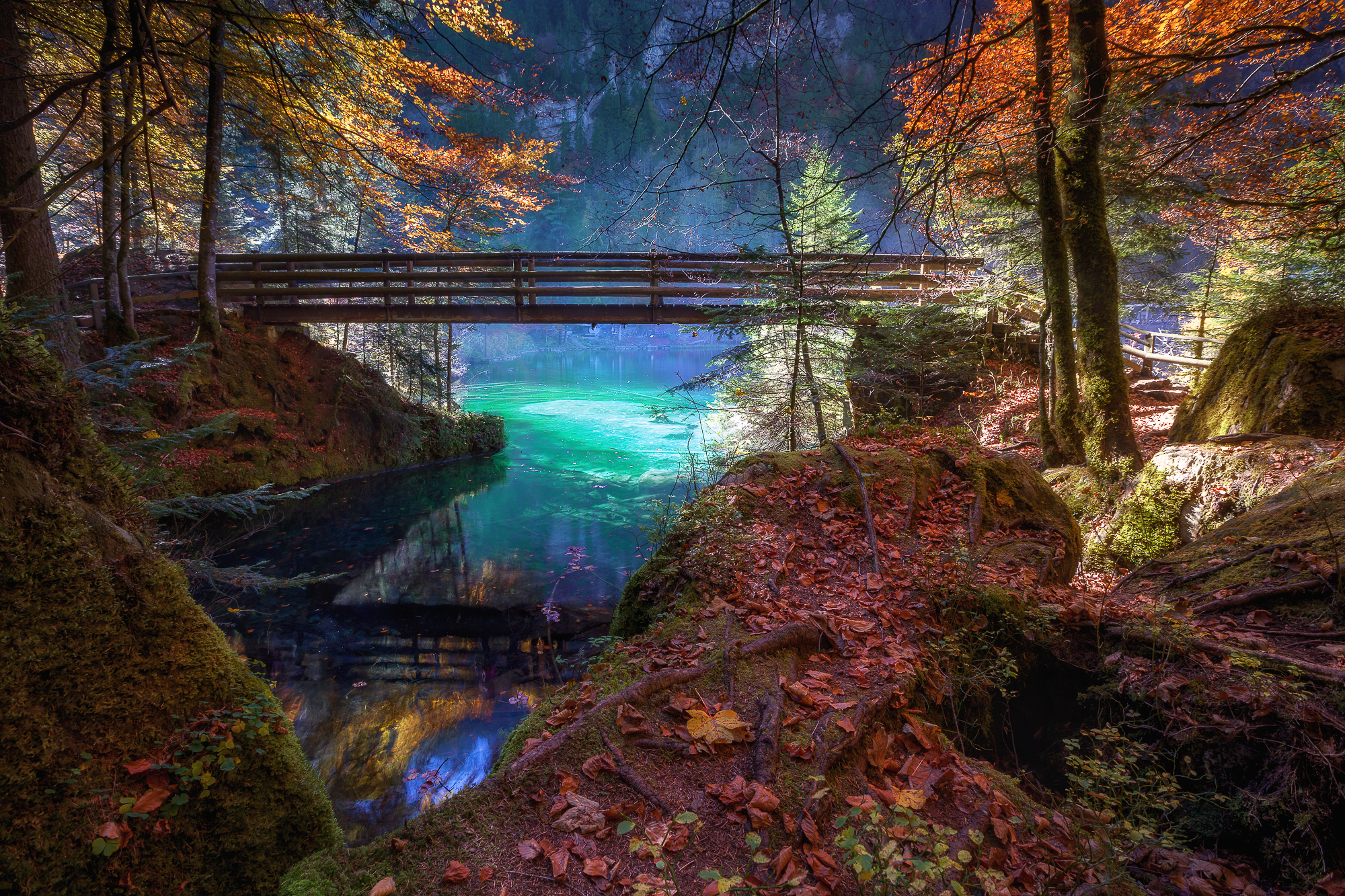 The photo I have on Facebook published and some wrote to me, just to say that the colors appeared to be unrealistic. But what should I do? It looked so exactly like this and although I do not need me to justify, I show stop also the completely unedited image, came exactly as it from the camera out. 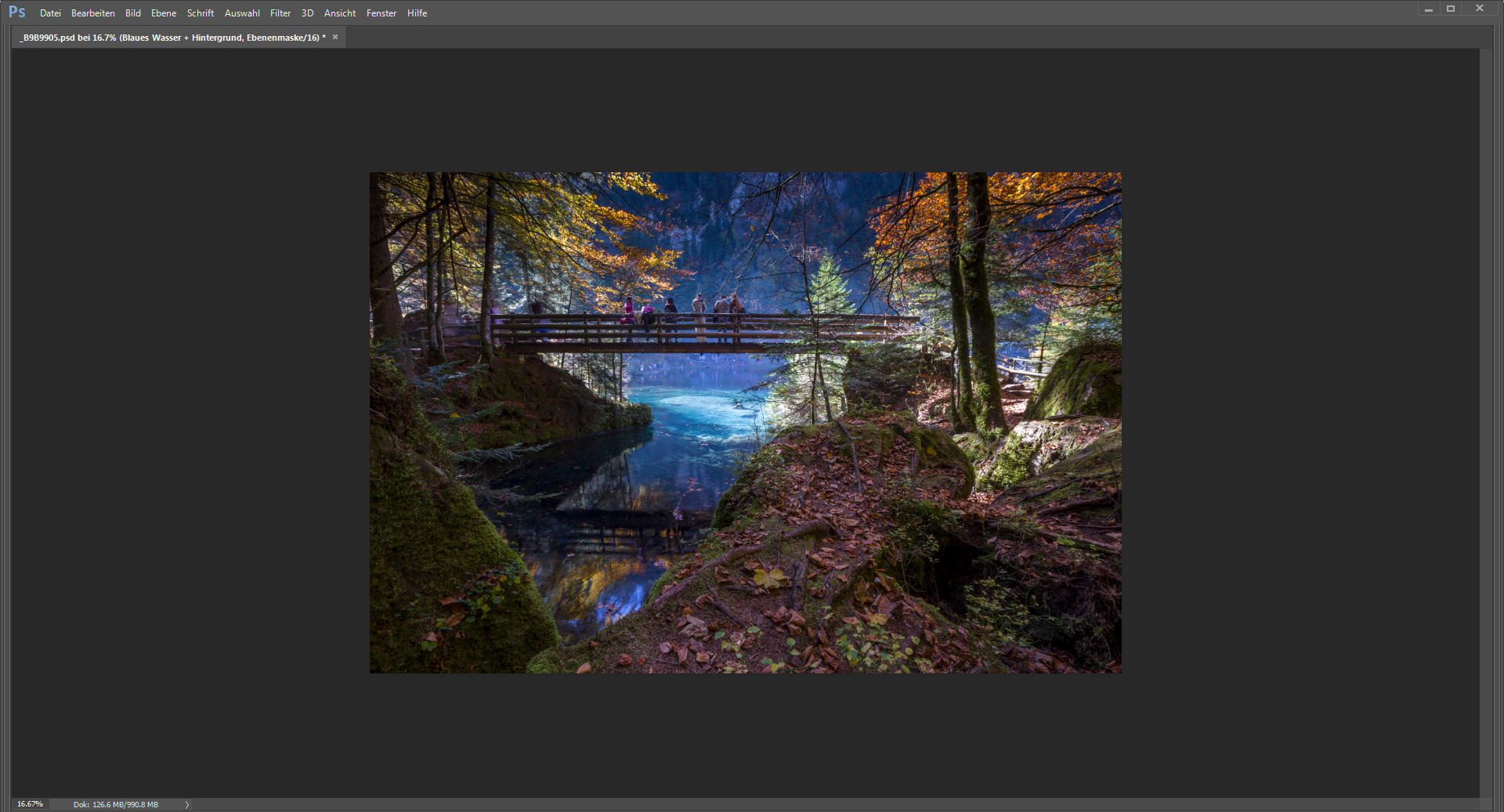 As you can see the tourists were everywhere and demanded not only in pictures, but also later in Photoshop, to have some techniques on my part to disappear this. Some could I but reasonably temples for the people on the bridge, I had to apply masking techniques. I tell you how I'm vorgenagnen:

I left the camera on the tripod and photographed several times from the exact same angle. The people were moving and then walked on, showed up again while others. I had several pictures of the bridge with people at different positions. then Photsohop I really should have all pictures übereianderzulegen and mask out the job, who were without the people. So I could because at least, save the very tedious stamp work.

But it turned out generally as a very patient affair. Again and again, people ran into the picture and I had to reject a lot of photos and wait again for the right moment. A few young girls from Russia, I had also times briefly ask the office for a few minutes to leave, so I could make a single photo at least.

The trail around the lake had a lot of steps that could be, of course, perfectly staged to lead a line in the picture. That's what I did and was very excited about it. 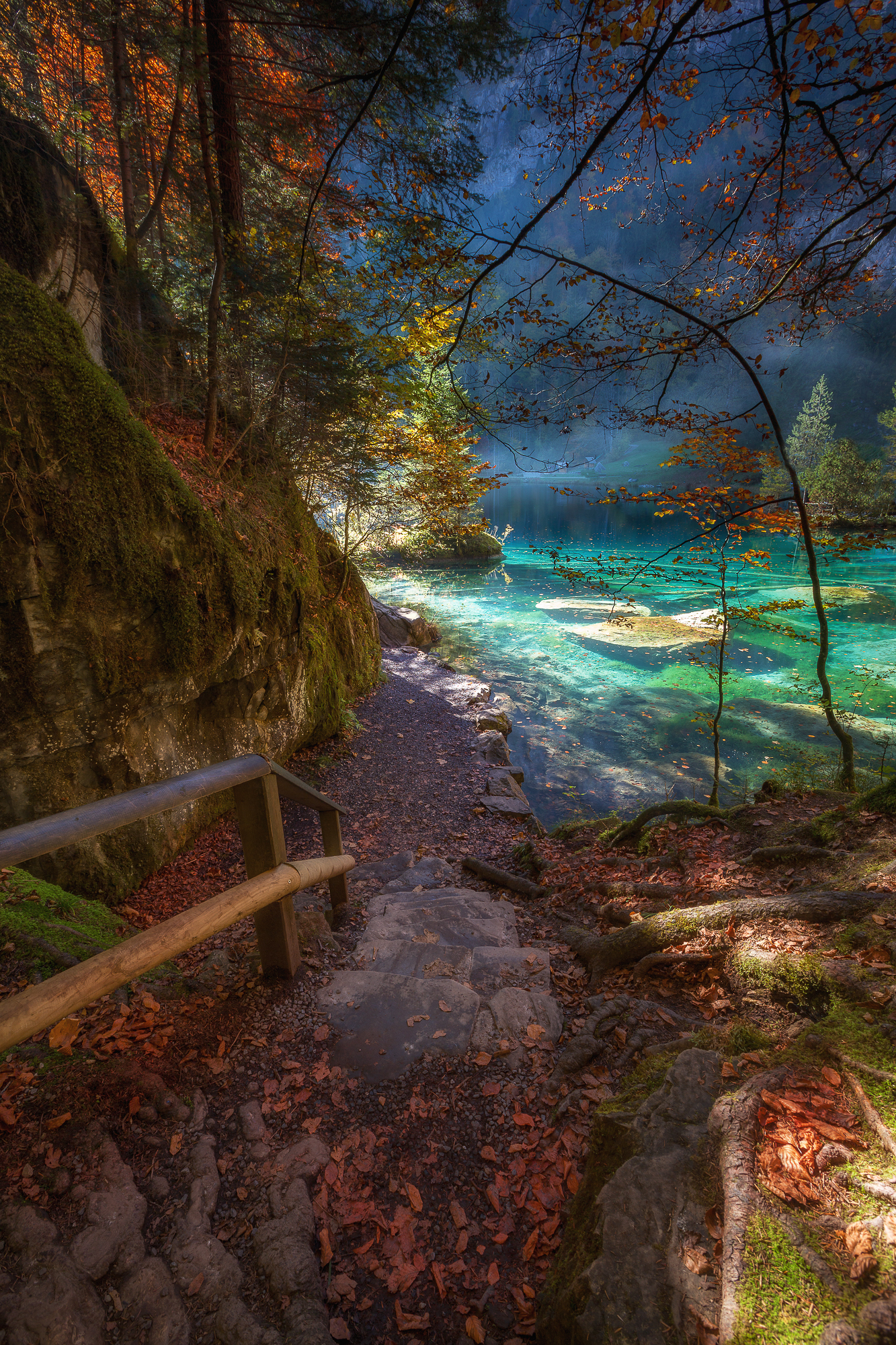 Normally, I almost never take pictures in direct sunlight. too much shade, too much glare. But in this case, I was indeed in the forest, protected by the colorful leaves of the trees and the lake, this was directly absolutely brilliant color. Then, when the sun disappeared behind the mountains, also changed the lighting situation. after nearly 2 Hours we removed ourselves from the lake and wandered a bit through the forest and explored the surrounding area, which was just fantastic. But slowly we decided on the way home and I'll come here definitely again in winter, when everything is full of snow, the blue hour and a starry sky. 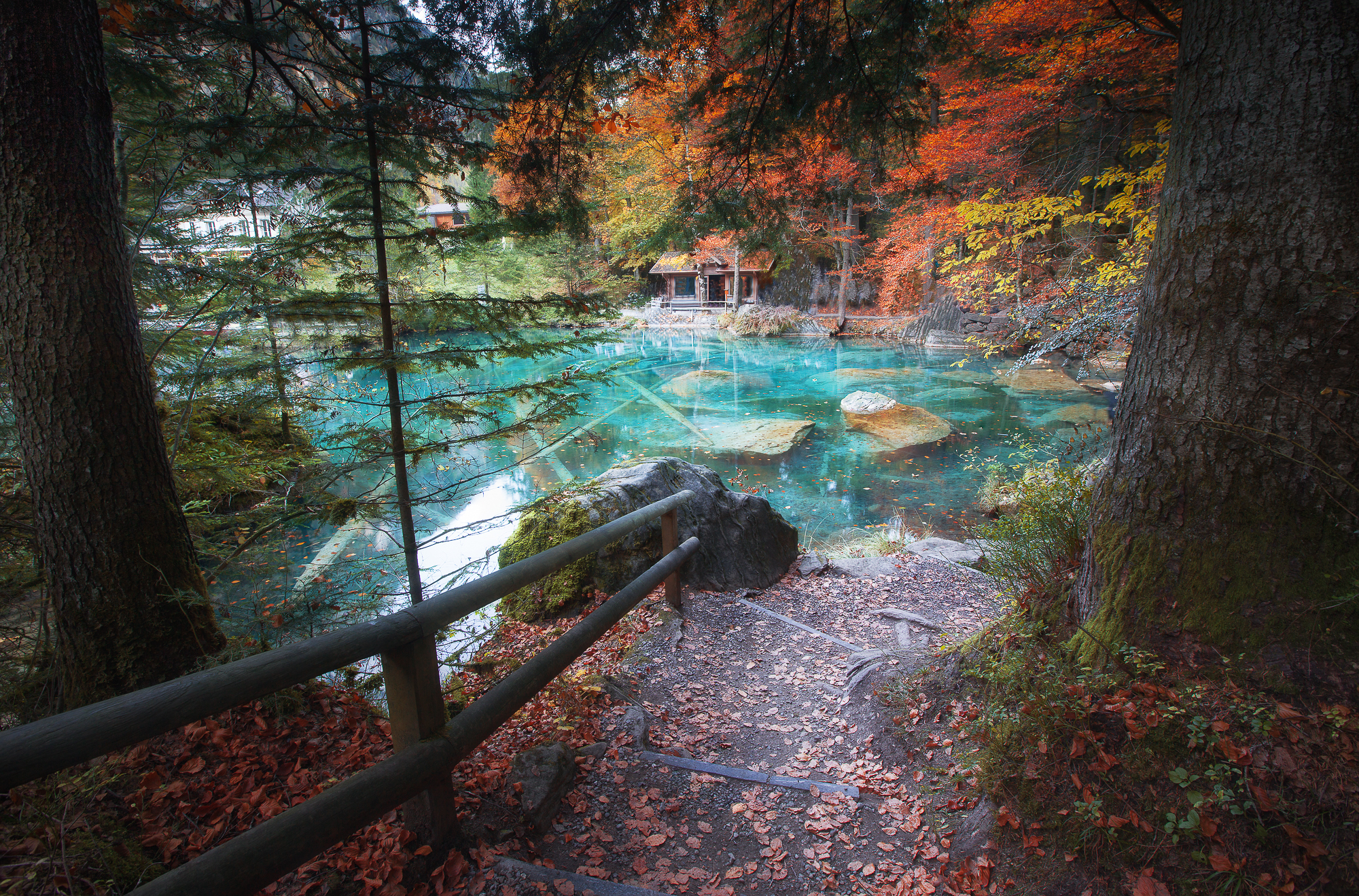 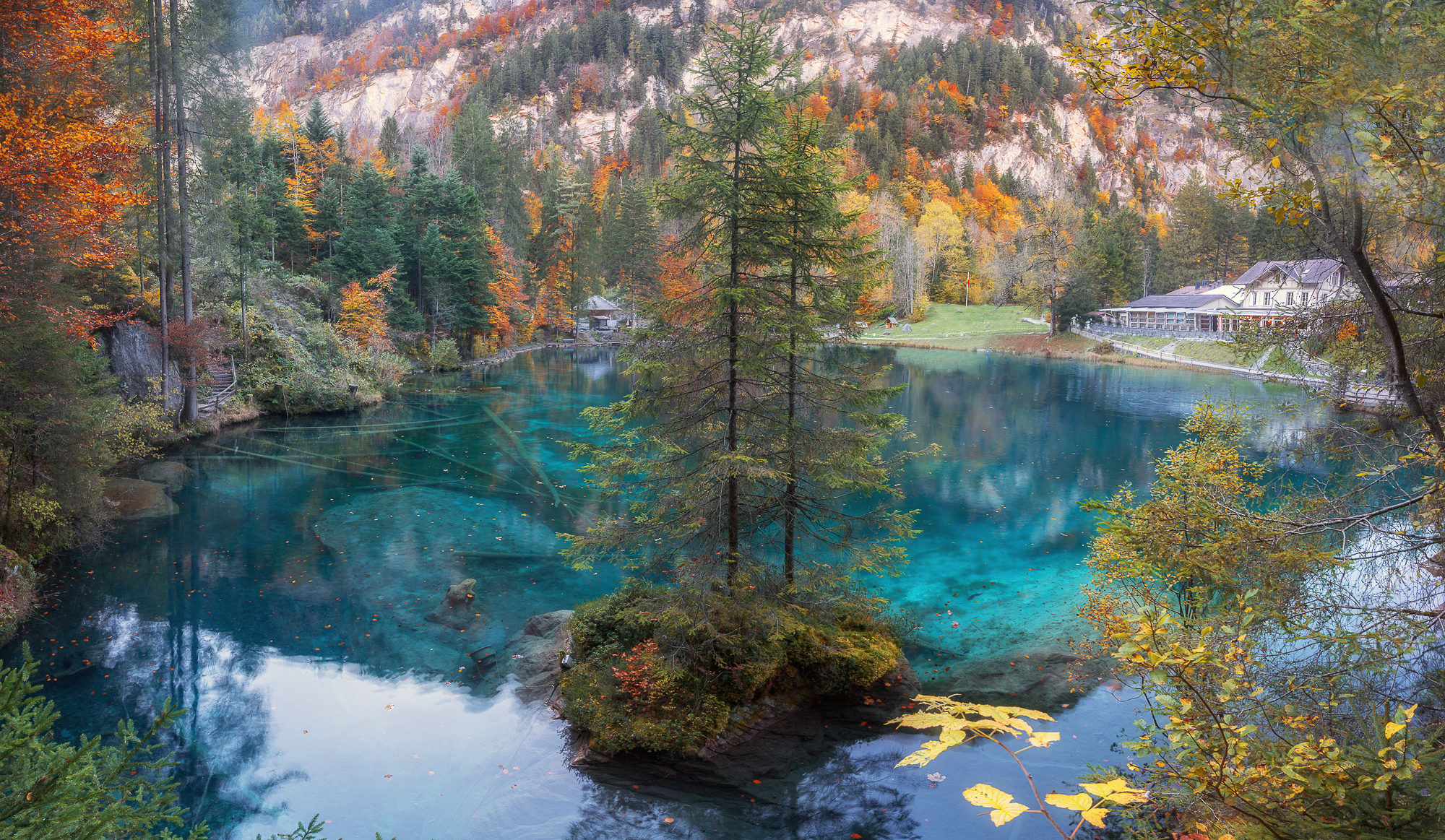 But ... where is my son? Barely out he already came running up to the corner with a cellophane trout in hand. We laugh and do not ask further. He then cooked the fish themselves and shared with us at home 🙂